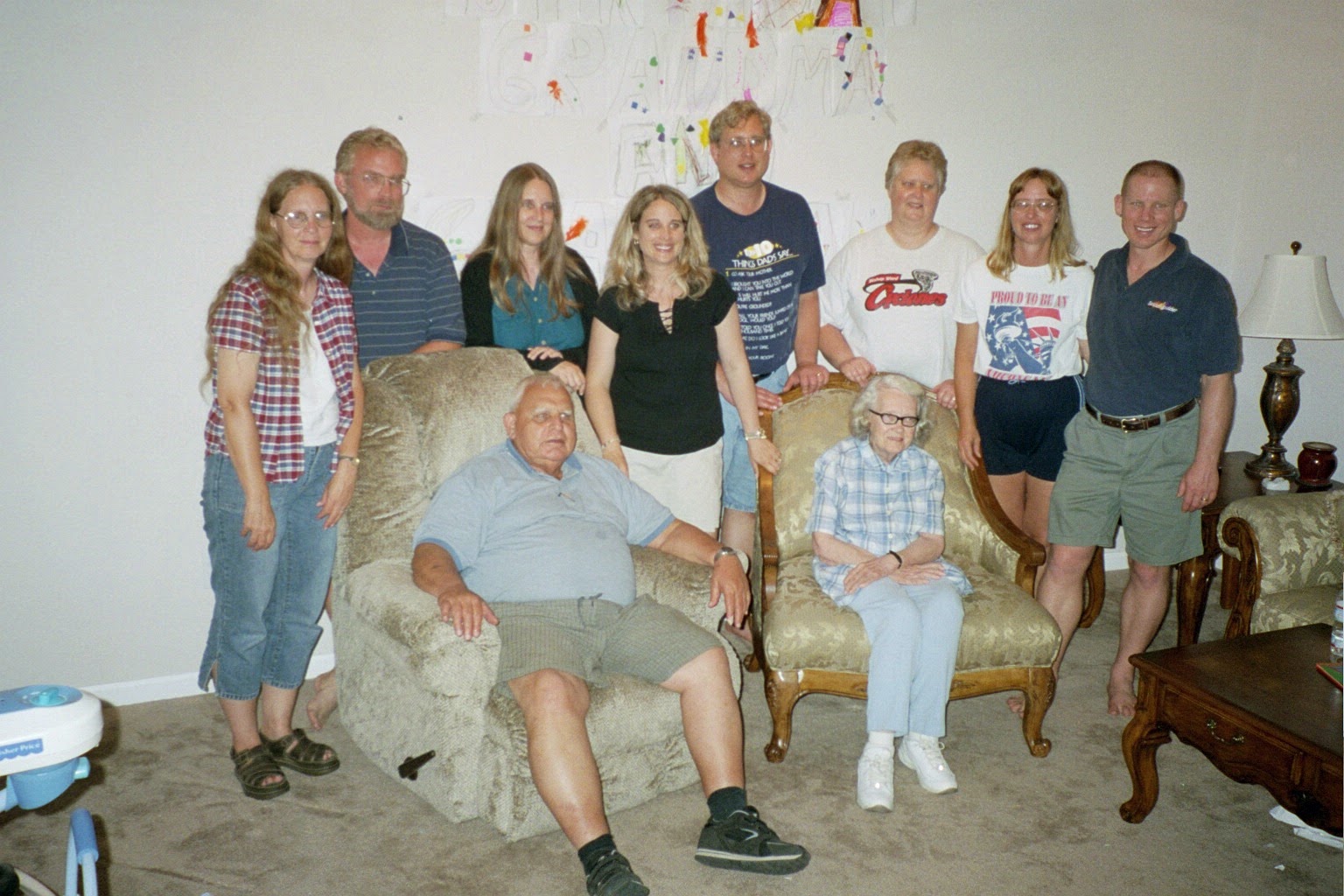 The many blessings of a large family far outweigh the difficulties. Unlike some parents who carefully plan the number of children in their family, my parents took what God gave them.

As a result, I'm blessed with seven siblings. I'm number five in the family with three older sisters, one older brother, two younger brothers and one younger sister. This family photo was taken in 2004 at a family gathering celebrating my Dad's 80th and Mom's 79th birthdays. 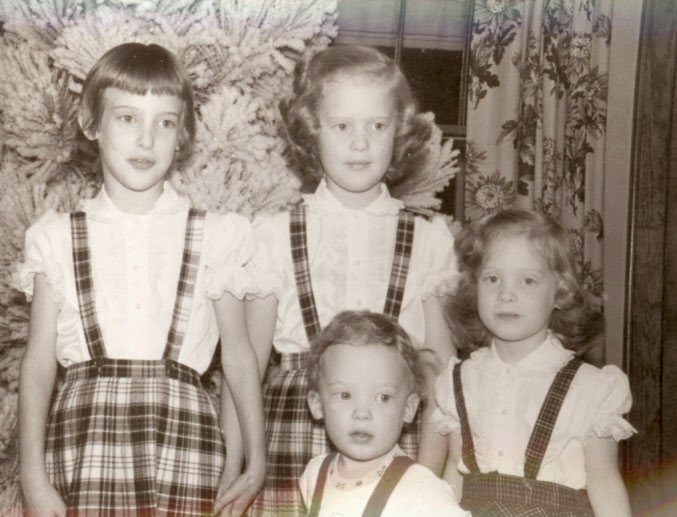 By the time I was born, my parents' family consisted of three daughters: Susie, Kathy and Debbie and a son, Bob, Jr. who was called Butch.

I arrived on the scene late at night on December 6, 1957 in Ft. Ord, California, where my Dad was stationed in the Army. I've been a night owl ever since. 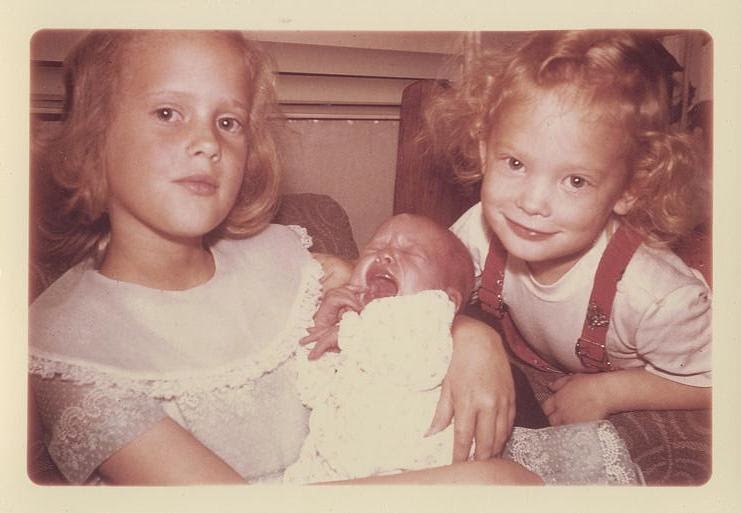 From the start, I had lots of Mother's helpers. My sister Kathy is holding me in this photo while my brother Butch looks on. Butch's cute curls were cut off not long after this photo was taken, but reappeared when he was in high school. 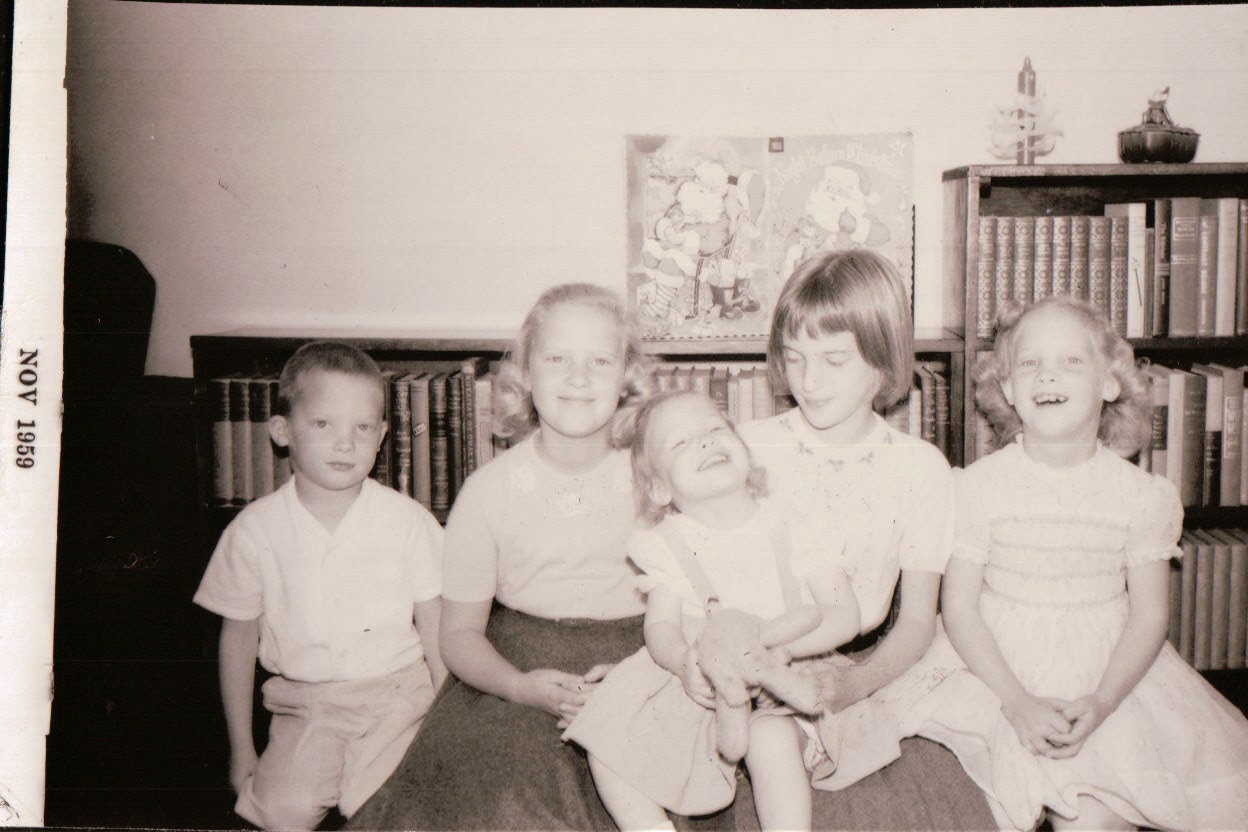 Posing for Christmas card photos was among our family's traditions. My Dad always took a lot of pictures. At some of the places where we lived, Dad had a darkroom where he developed and printed his photos. In this photo, I'm holding my favorite stuffed animal, Black Nose Doggy. 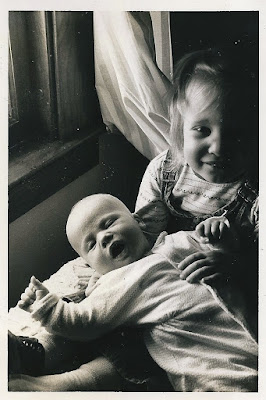 My little brother Mike was born on January 22, 1960, about six weeks after my third birthday. Mike was a happy baby and we were very close as kids. 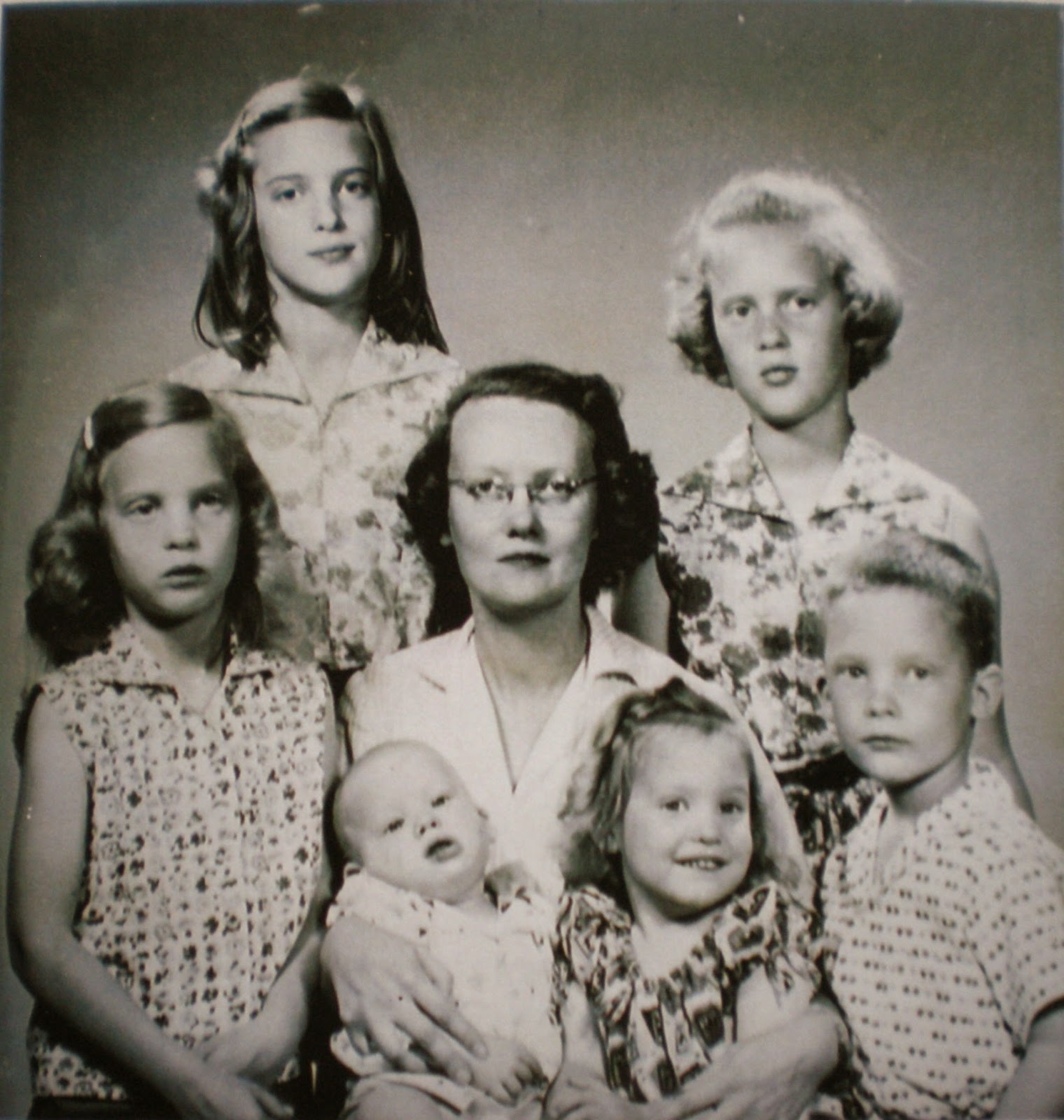 Mike was still pretty young when our family moved to France. This was Dad's second time being stationed in France. Butch was born in France when Dad was stationed there in 1955. I guess I was a rebel way back then since I was smiling for the passport photo while everyone else was wearing their serious faces. 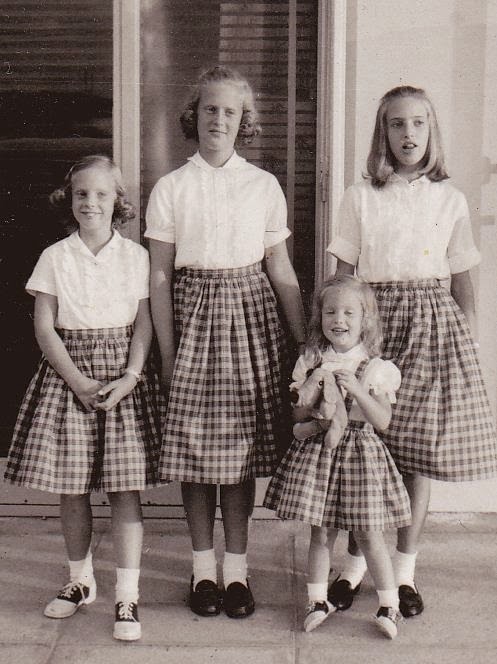 Black Nose Doggy was in this sisters photo taken in 1961, but my brothers Butch and Mike weren't, although Butch was peeking out from around the corner in another version of the photo. Apparently my Mom liked all girl photos because there were quite a few of them taken through the years. 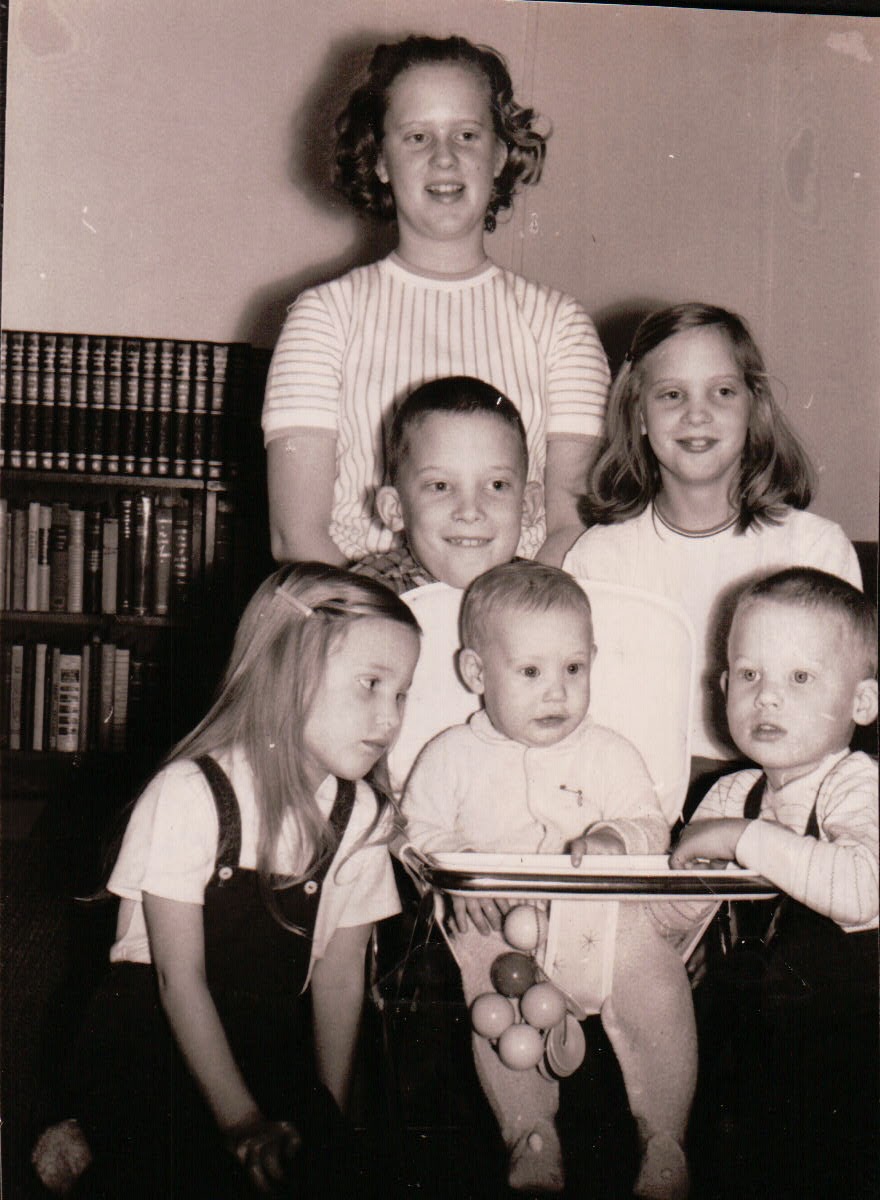 Baby Pat joined the growing family on August 12, 1962. Pat was my parents' seventh child, the second child born in France and is the youngest boy in our family. My sister Susie is missing from this photo. 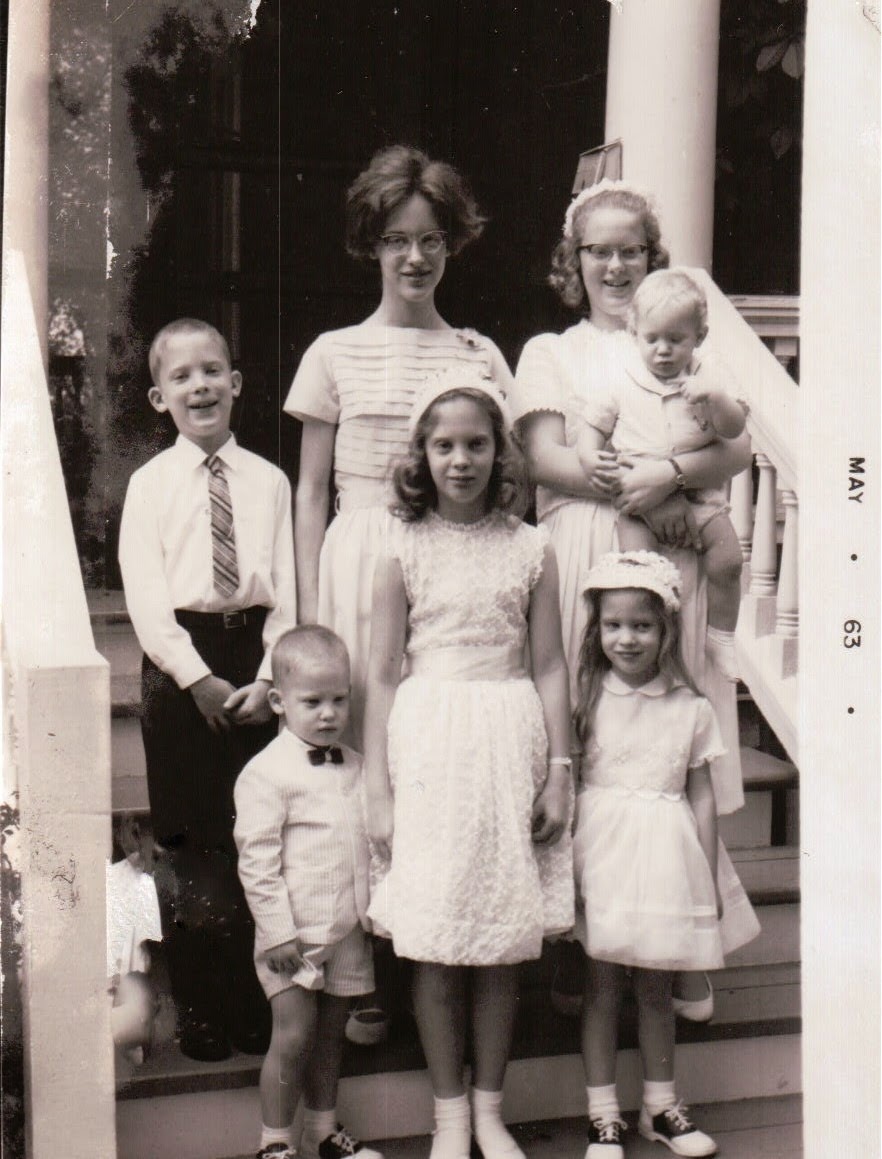 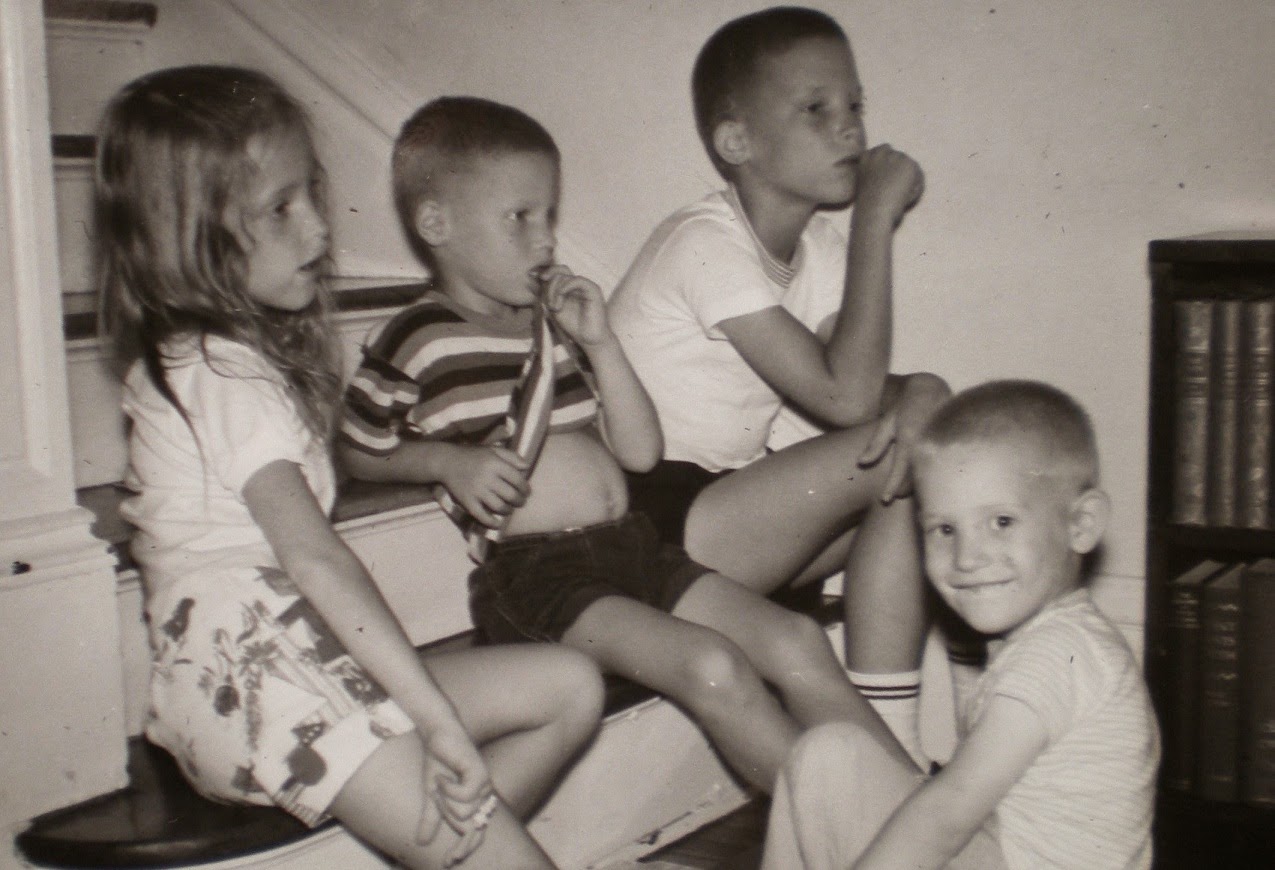 I don't have any group photos in my collection of all seven of us kids between when Pat was a baby and when Nancy was a preschooler, but I love this photo of me with my three brothers taken on a summer day. I'd guess we were up to no good, but who knows. 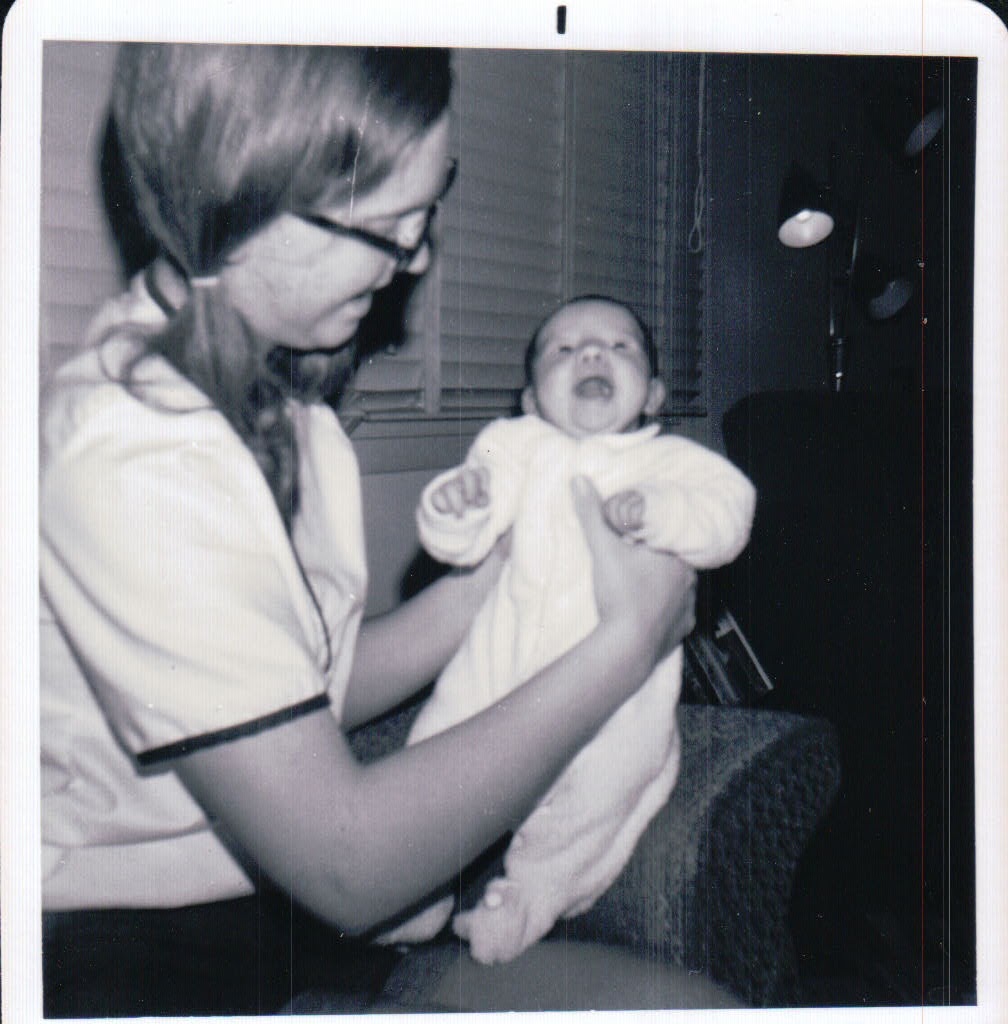 Nancy, the baby of the family, was born on March 23, 1968. My sister Debbie is holding Nancy in this picture. As in many large families, Nancy's older siblings served as surrogate parents from time to time. 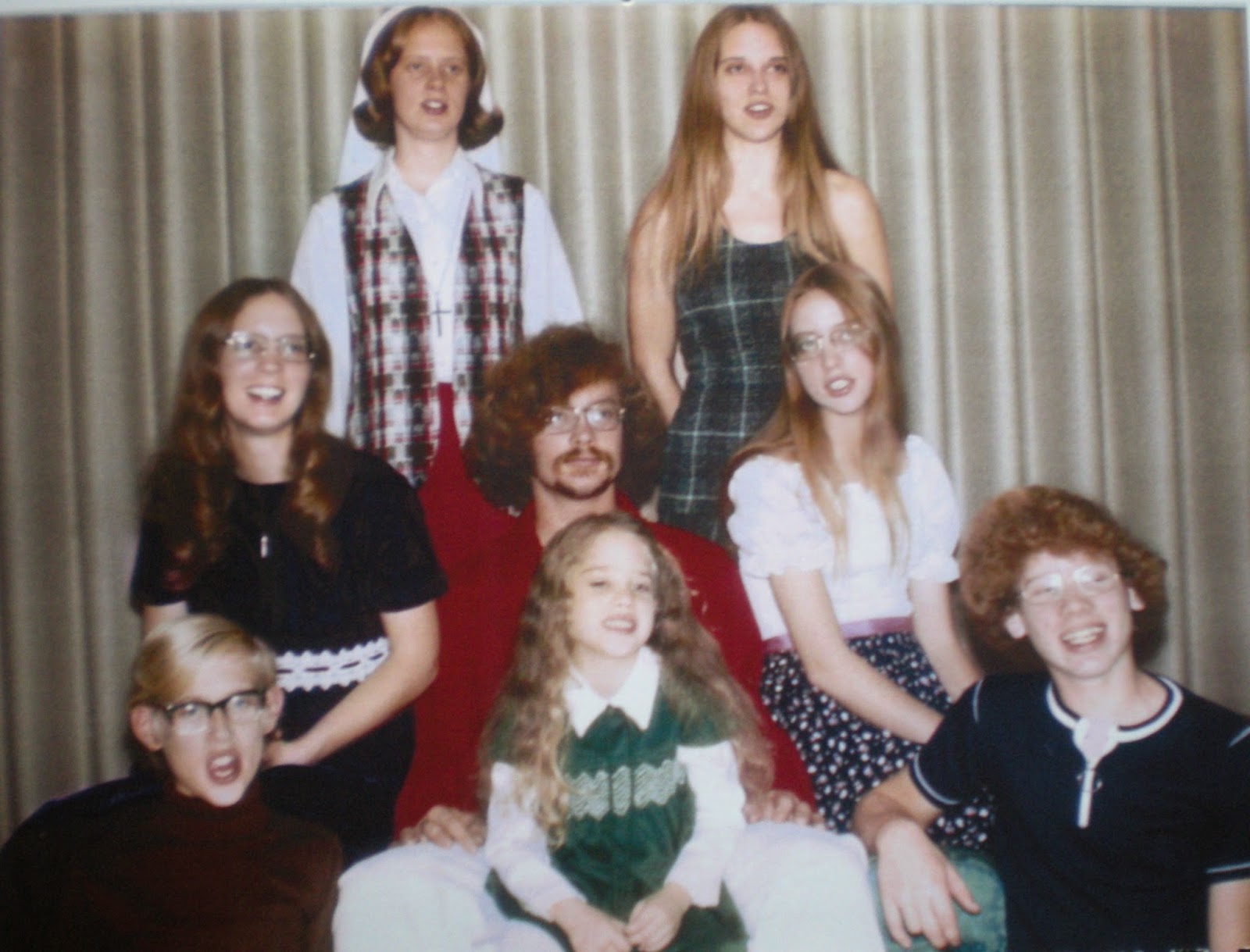 It's not the best picture of any of us, but this is one of the few pictures I have with all eight of us together. When this photo was taken, my sister Kathy had already chosen her life's vocation as a Sister of Charity of Leavenworth. Within a year or so of this photo, the oldest five of us kids were no longer living at home.

This sibling photo was taken by a professional photographer in 1984. We refer to this as the "birth order" photo. From the left, you see Sue, Kathy, Debbie, Bob, Sandy, Mike, Pat and Nancy. 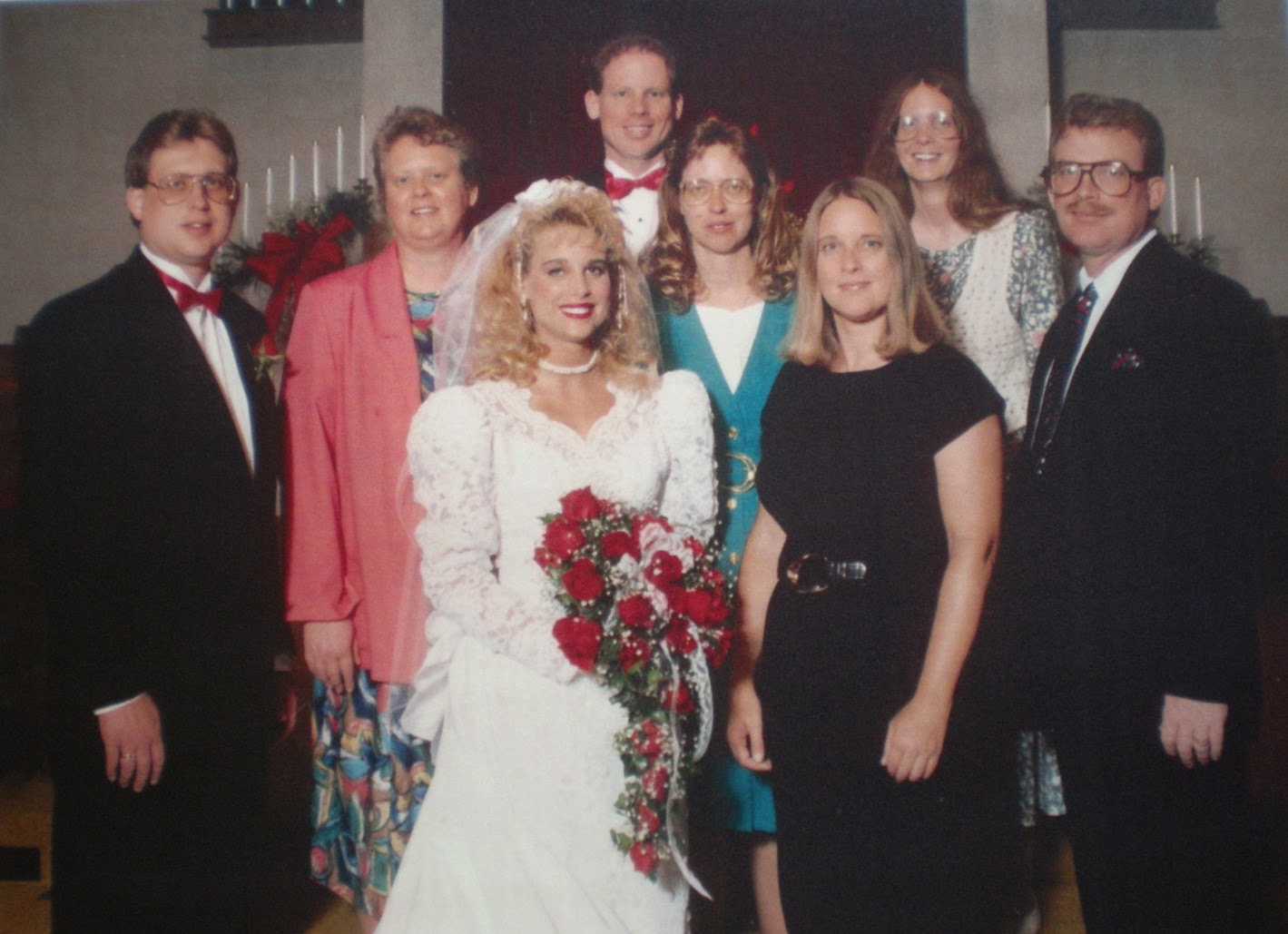 The next time we were all together for a family photo was at my sister Nancy's wedding in 1994. We're all scattered from Virginia to Hawaii and it's hard to coordinate schedules to get home at the same time. 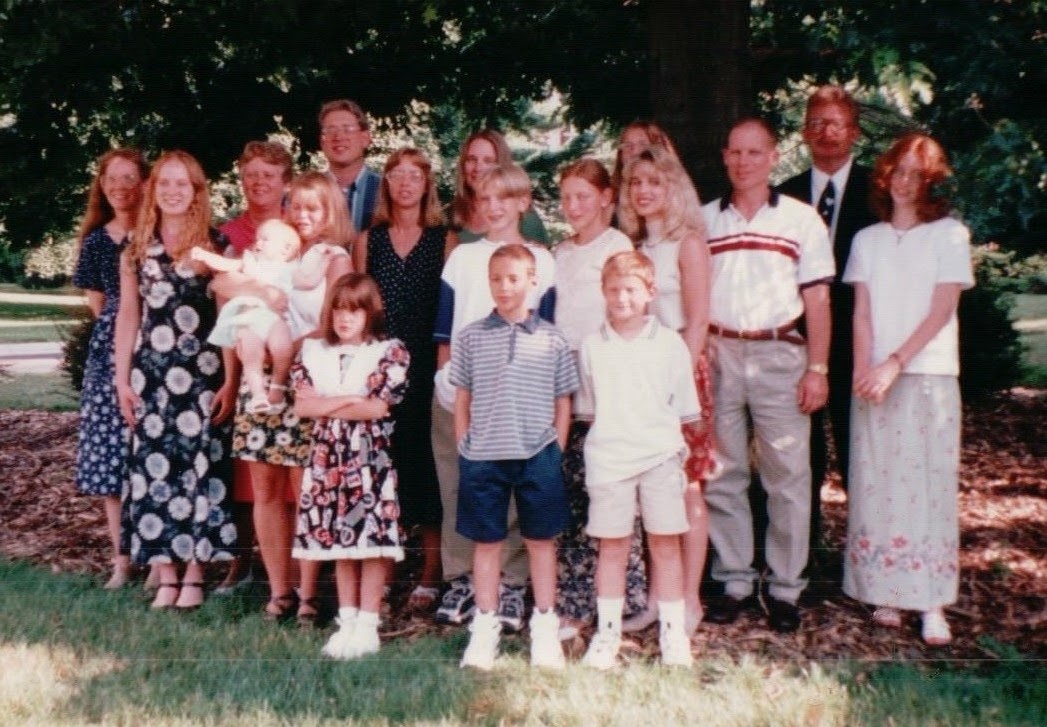 In the summer of 1997, we all came home to celebrate our parents' 50th wedding anniversary and Kathy's 25th anniversary as a Sister of Charity. This sibling photo included the eight of us and all of our children except Daphney, Bob's oldest daughter. All of us except Sue came home for Christmas in 2007. My brother Pat's house was filled to capacity at the family gatherings which included 16 of my parents' grandchildren and their two great-grandchildren. 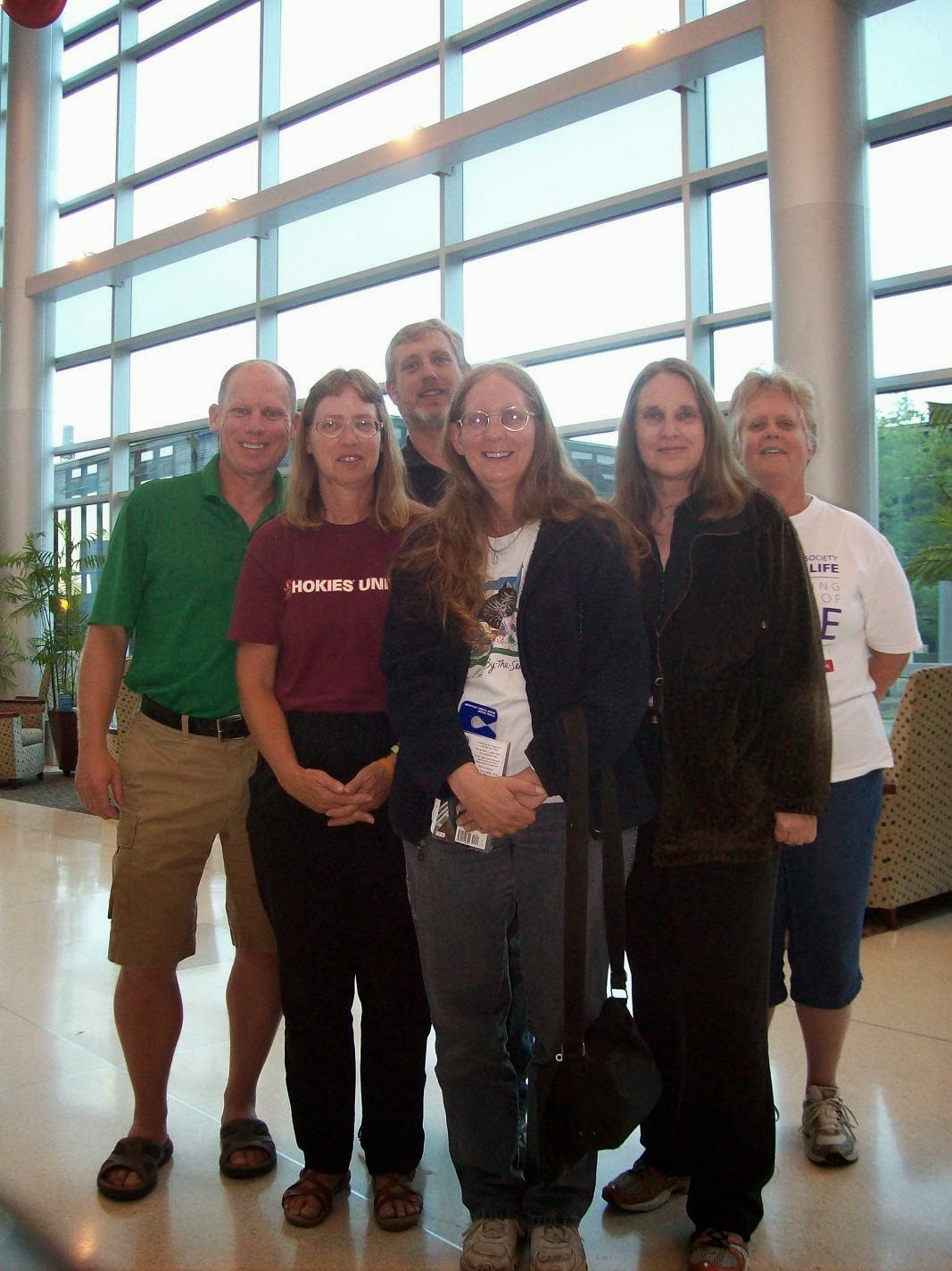 As my parents have aged, many of our homecomings have been prompted by a parental emergency. My brother Mike, sister Sue and I all came home when Dad was in the hospital after an injury sustained at scout camp in 2009. While recovering in a nursing home, Dad's heart stopped beating, but thankfully he was resuscitated by the physical therapist. 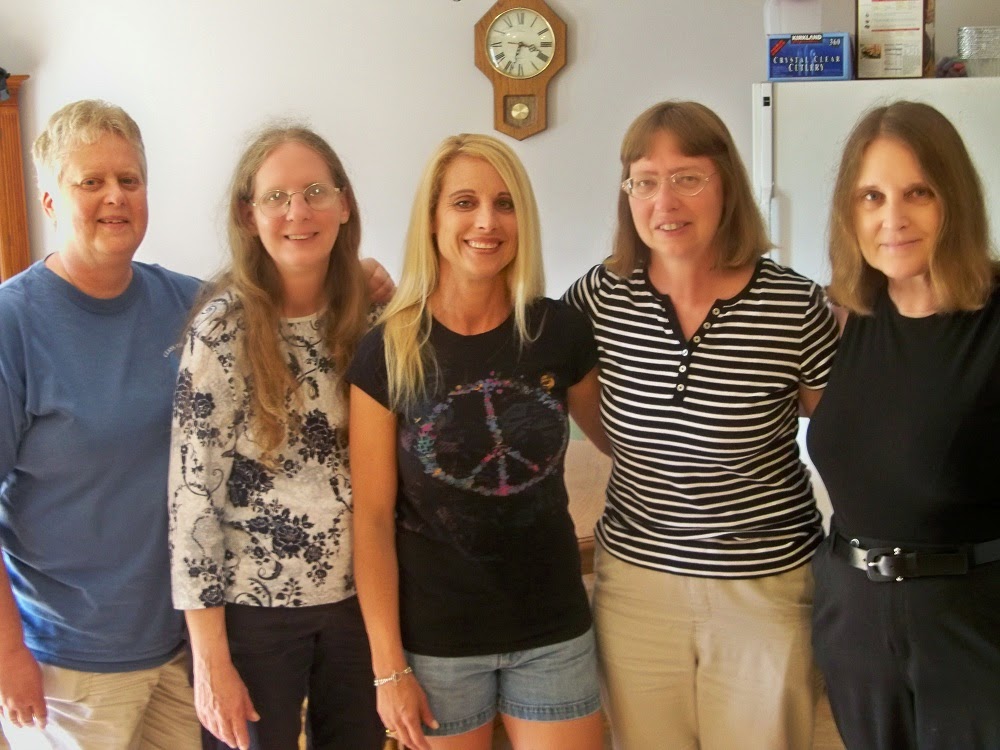 When Debbie's husband Jim passed away on May 28, 2011, all five sisters were together for the first time in several years. My brother Bob had returned home shortly before my sister Sue arrived. 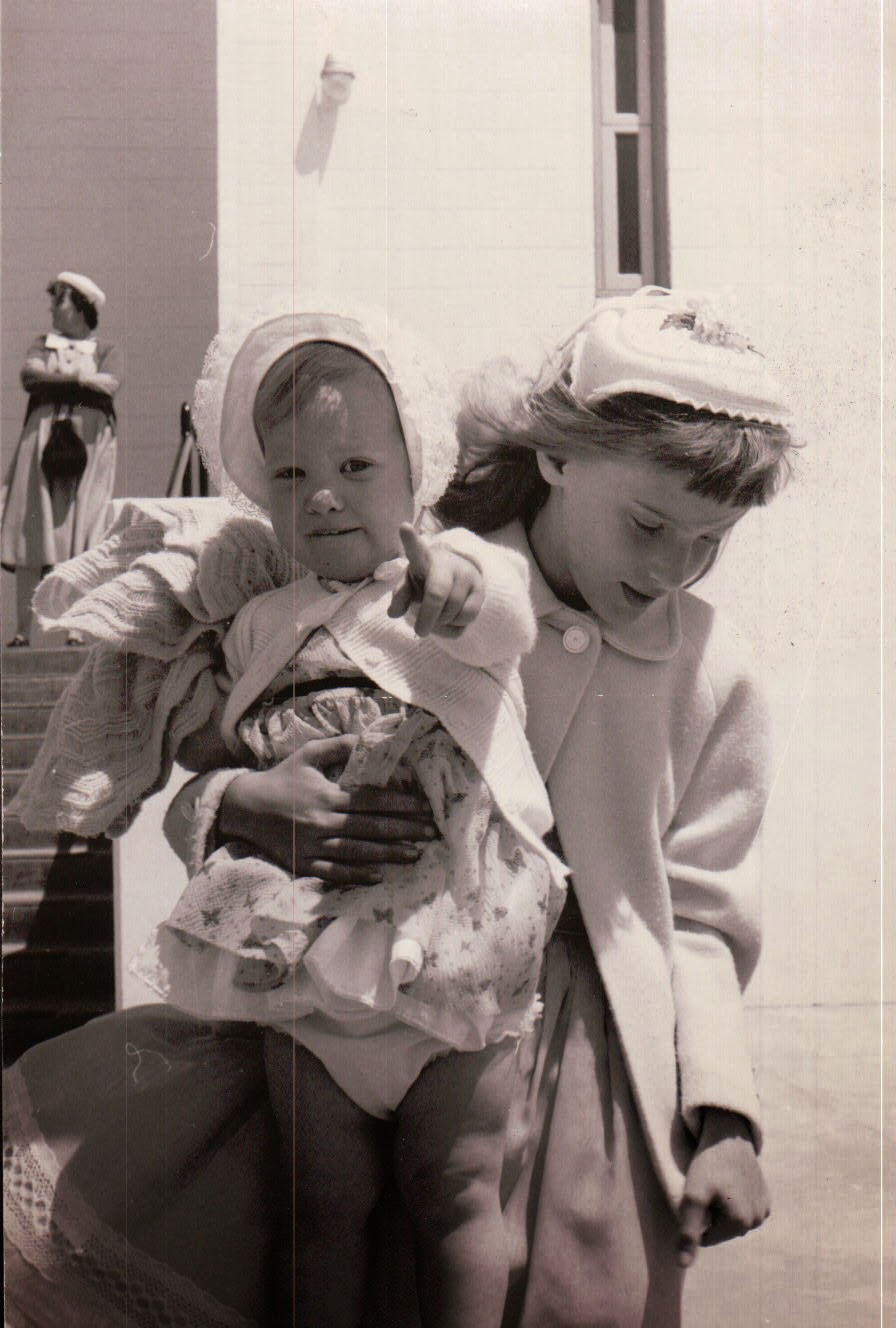 My sister Sue carries me in an undated photo, taken while our family was stationed in France. Sue went off to college when I was pretty young and moved to Hawaii after college. We don't see each other very often since we live so far away. 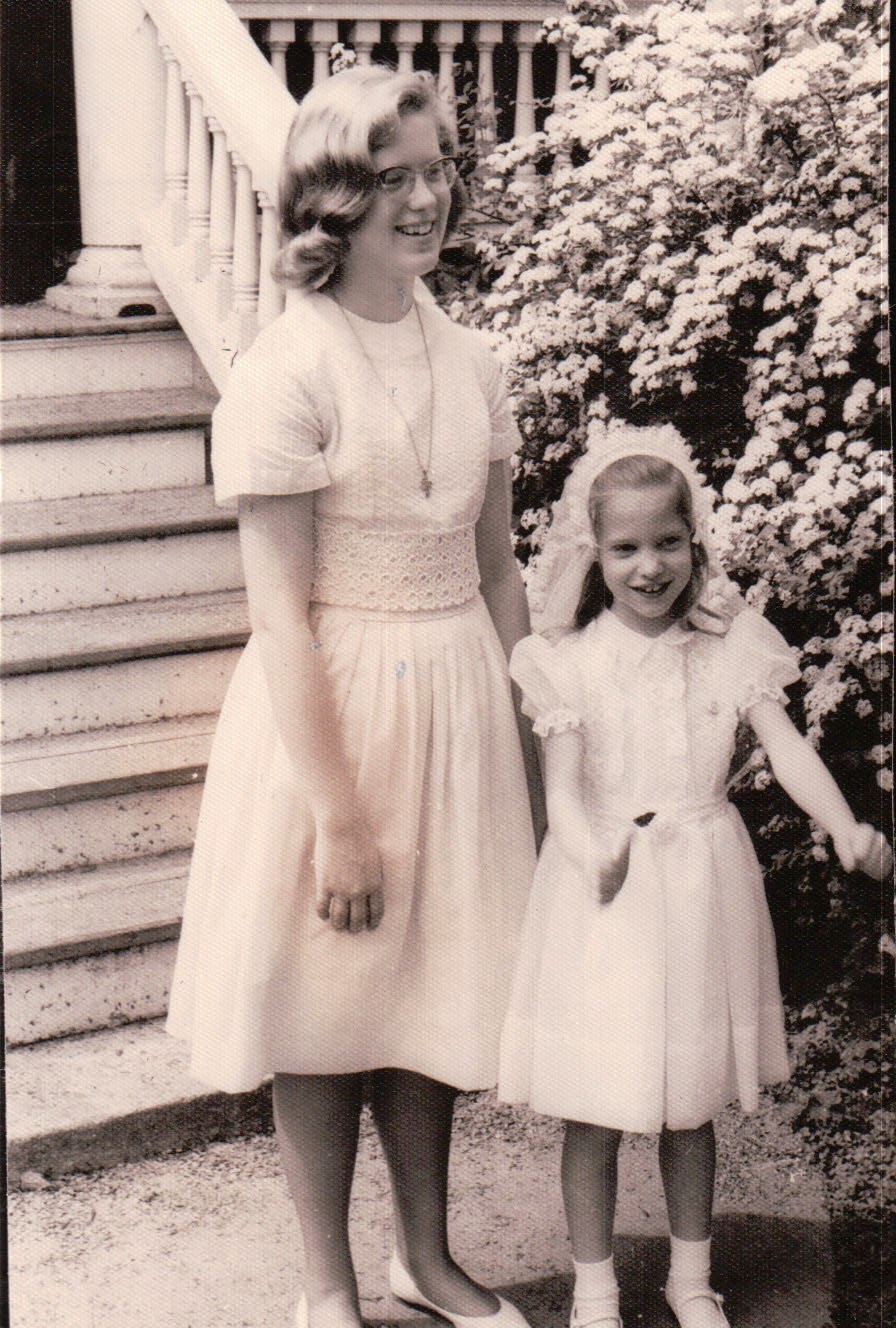 My sister Kathy poses with me on the day of my First Communion in May 1965. Kathy has been like a second mother to the younger kids in our family. She's been there for me and my kids a lot over the years, provides a lot of support for our parents and is a real blessing to our family. 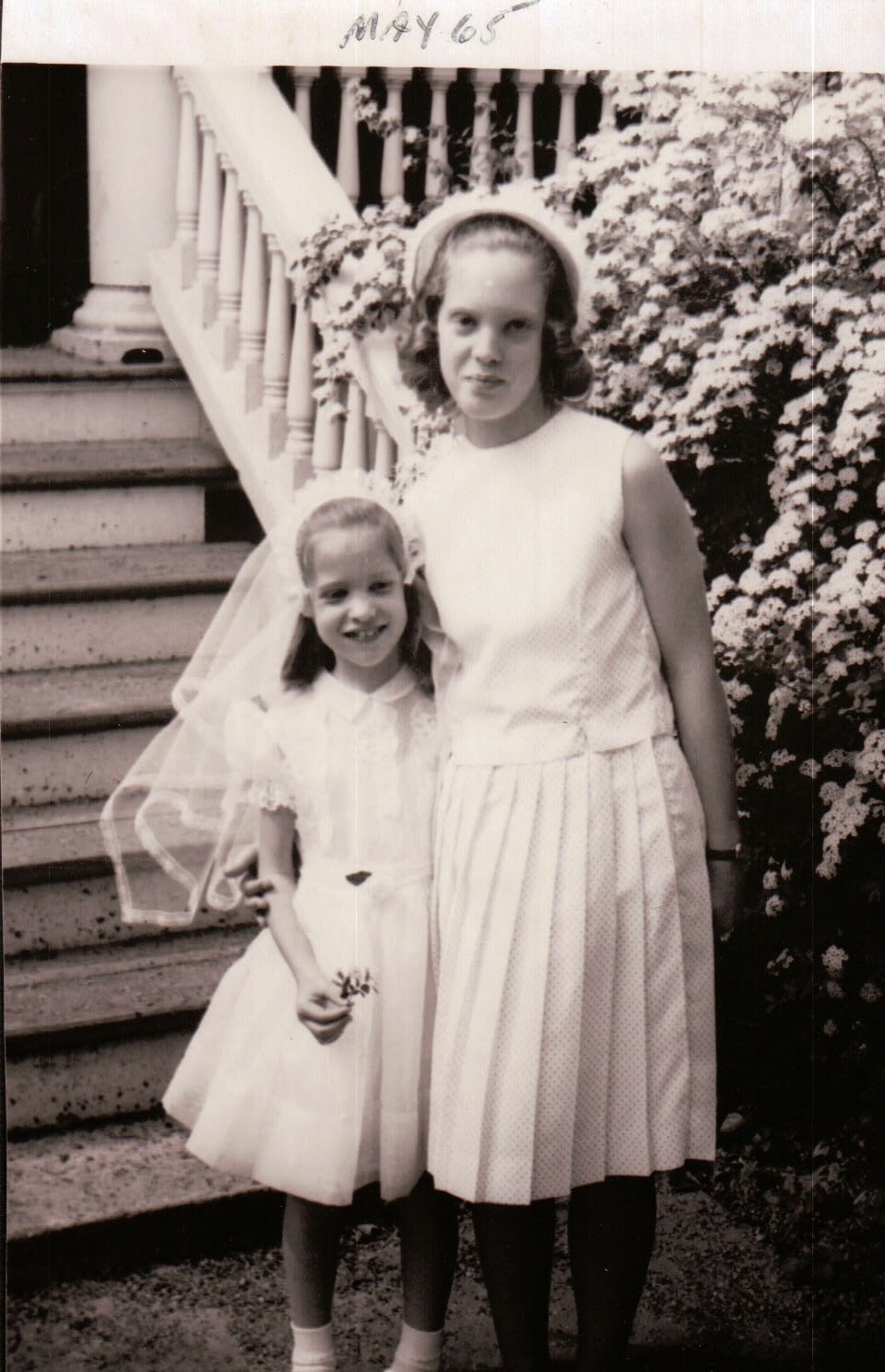 My sister Debbie poses with me on the day of my First Communion in May 1965. Debbie and I roomed together for most of our lives and raised our kids at the same time. When the kids were younger, we always stayed with Debbie and her family when we visited Kansas. Debbie and I are the only grandparents among our parents' children. 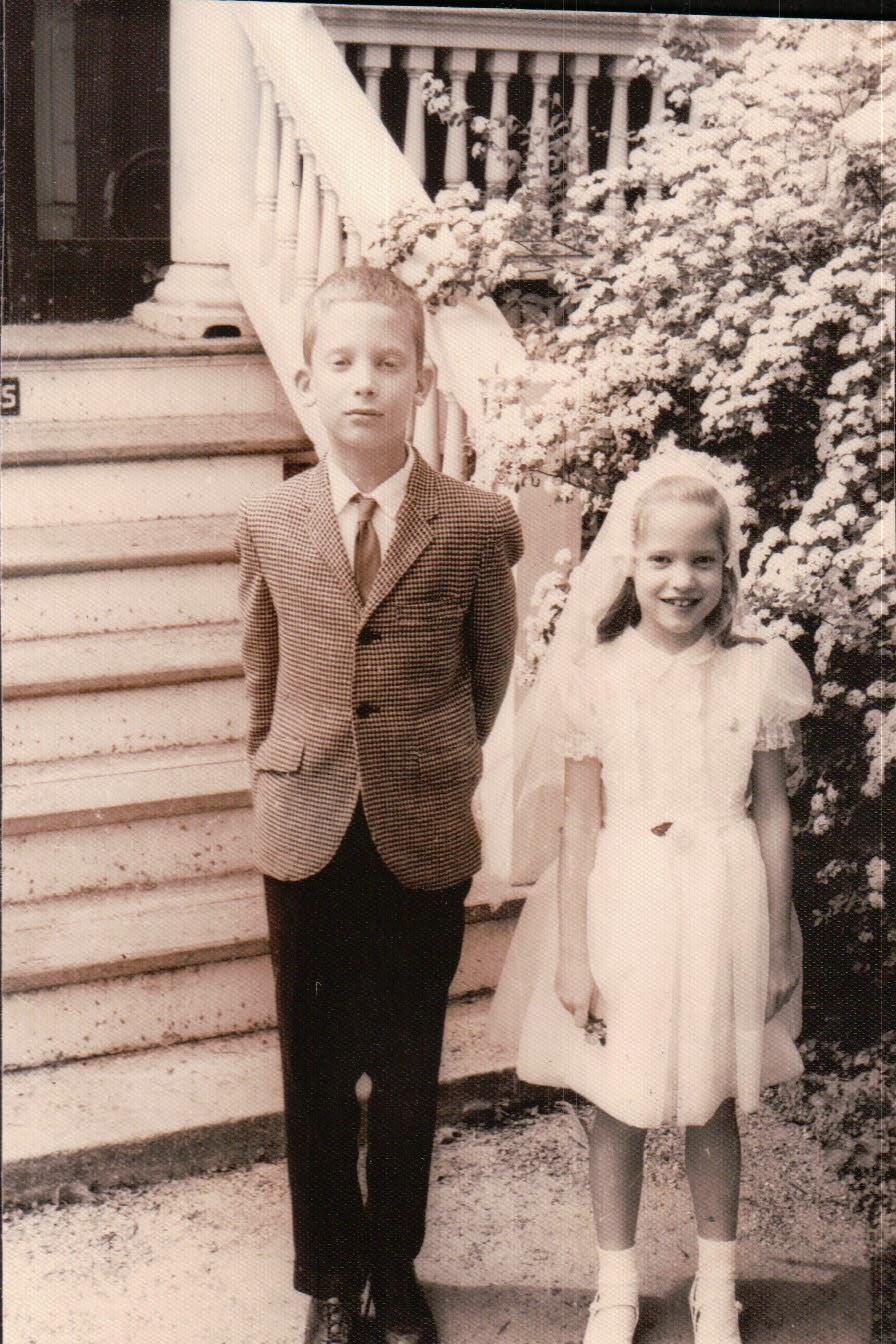 My brother Butch poses with me on the day of my First Communion in May 1965. Butch, known as Bob in adulthood, has spent most of his adult years living in the western states. Although we spent a lot of time together as kids, we don't see each very often as adults. 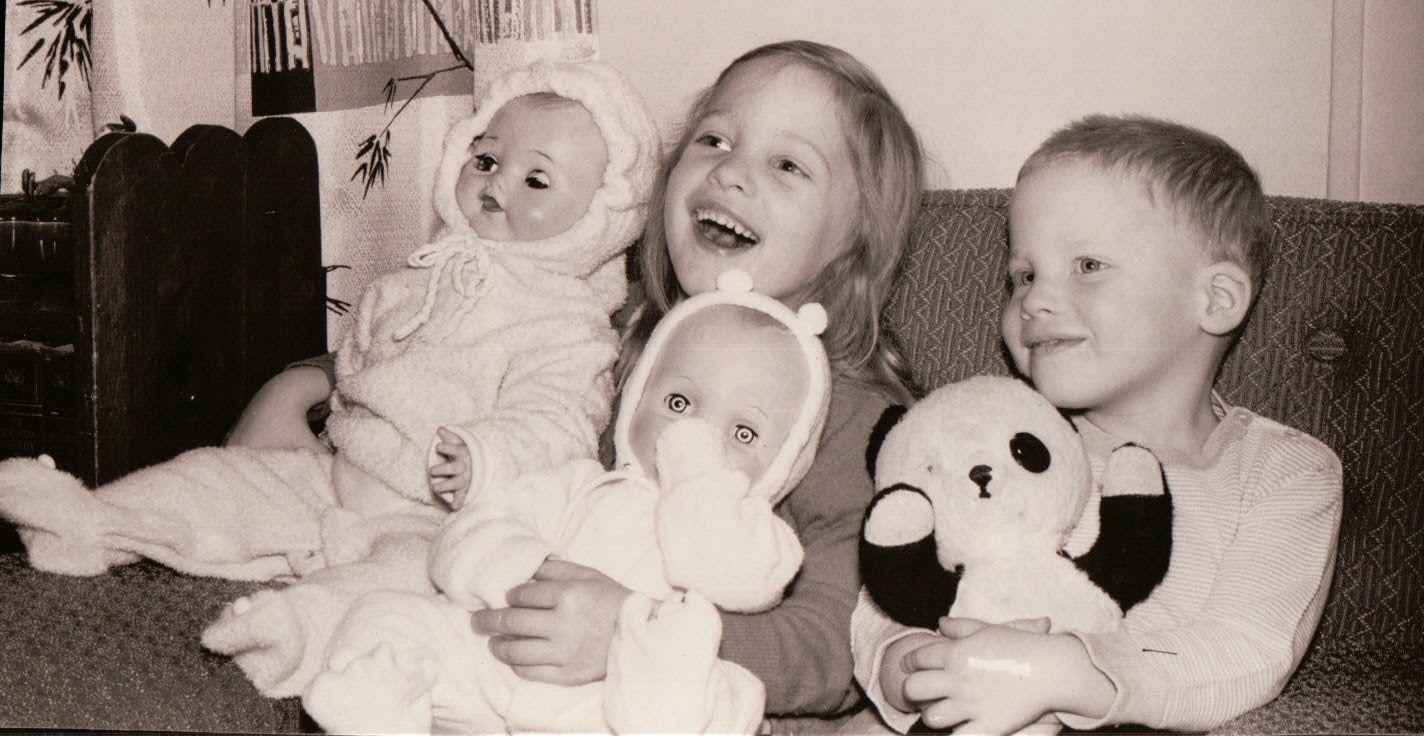 My brother Mike and I posed with my dolls and his bear in this photo, one of my favorites. Mike and I were together constantly as kids. Mike and his family live in Colorado so we don't see each other often as adults. 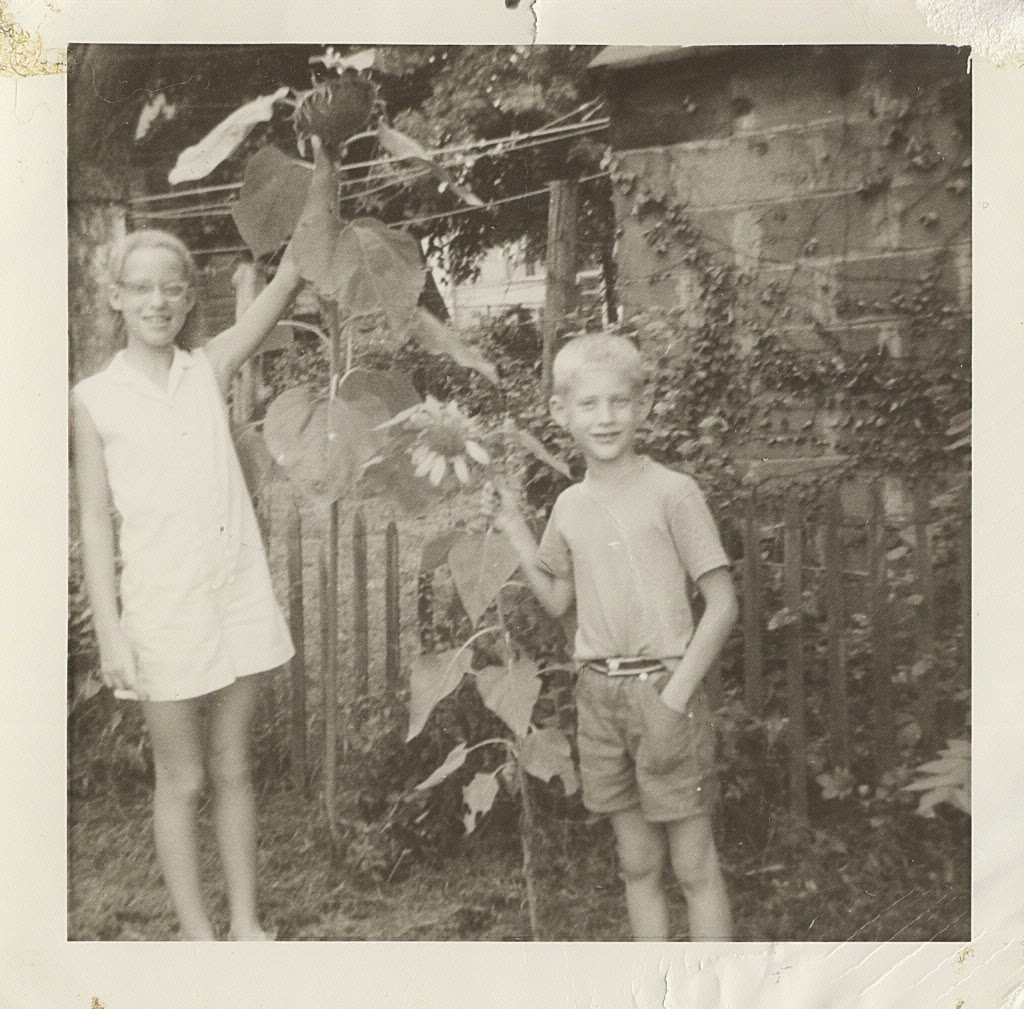 My brother Pat and I pose with our sunflowers in this undated photo taken in my parents' back yard. As kids, we spent a lot of time playing outdoors. When I visit Kansas now, I always stay with Pat and his family so we get to see each other a lot. Pat helps with many of the physical tasks at our parents' house. As the only son living nearby, he's also taken on the role of family patriarch. My sister Nancy laughs as I pose like a monkey on the clothesline pole in my parents' back yard. Nancy was raised by all of us. I married and moved to Virginia when Nancy was only 7 years old. Nancy has spent much of her adult life living in the western states so we don't get to see each other often. 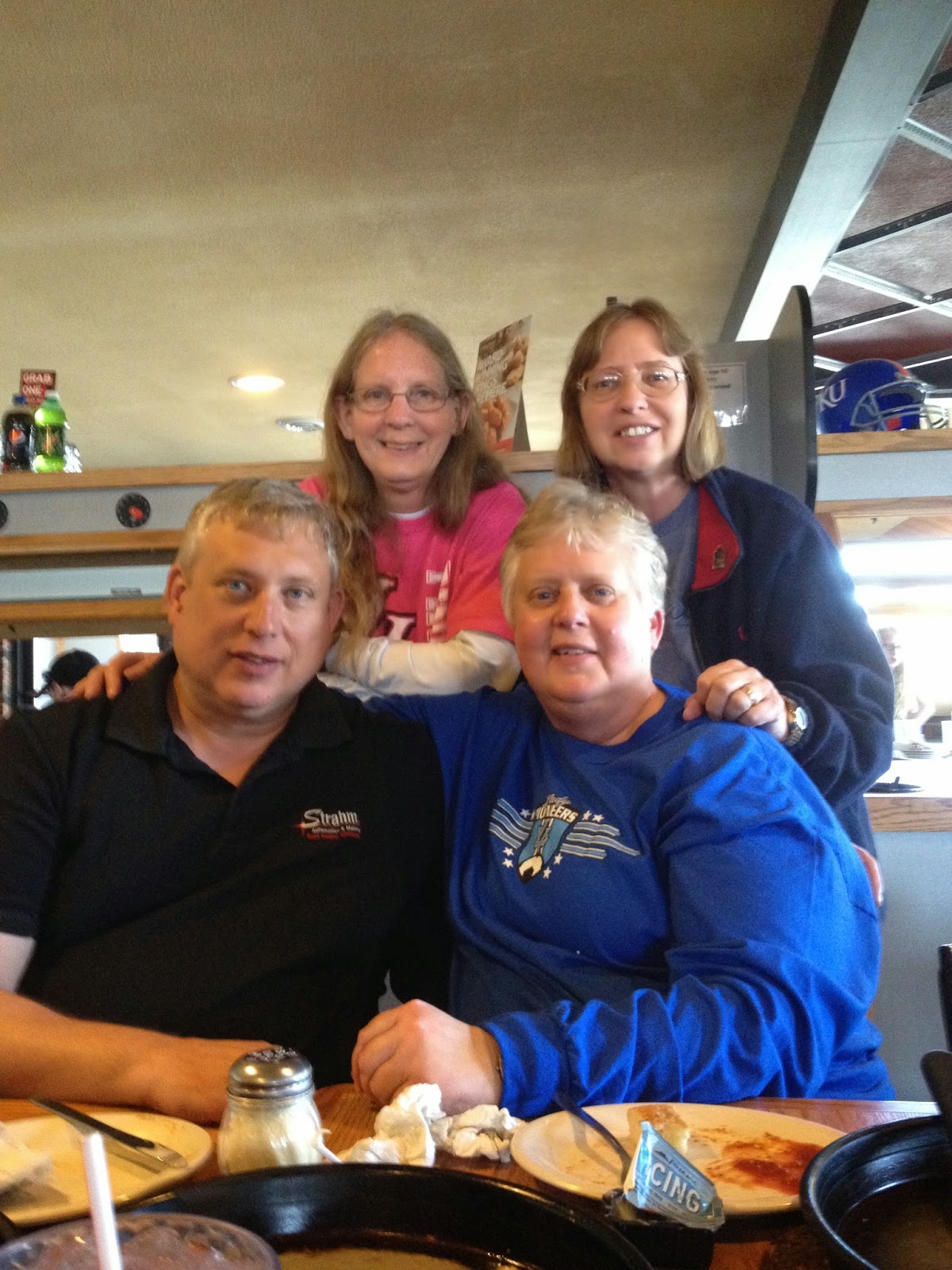 On all of my trips home, we gather for a photo of "the primes." Kathy is child number 2, Debbie is child number 3, I am child number 5 and Pat is child number 7. Kathy, Debbie and Pat all live near my parents so it's easy to get the primes together when I'm in town. This photo was taken at our Siblings Day celebration on April 10, 2014. I'm so blessed to have seven wonderful siblings!
Posted by Sandy Wallace at 8:23 AM No comments: