In Honor of Dad on Veterans Day 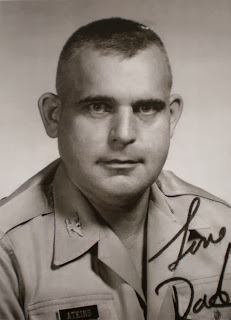 Each year on Veterans Day, this is the mental picture I see of my Dad.

Dad sent each of us a copy of this signed photograph of him in uniform when I was in grade school.

I carried this photo with me throughout my school years. A framed copy has been on my bookshelf for many years.

Dad has been retired from the Army for a long time after serving his country honorably during World War II, Korea and Vietnam. Dad served both stateside and in war zones around the world.

Dad enlisted in the Army as a young man. Like many young men of his era, Dad wanted to enlist immediately when the Japanese attacked Pearl Harbor.

His Dad, a World War I veteran, wouldn't let him drop out of school to join when we entered World War II.

Instead, he continued in college for a while before he enlisted in the Army. Another favorite photo I have of Dad is one when he was just entering military life. 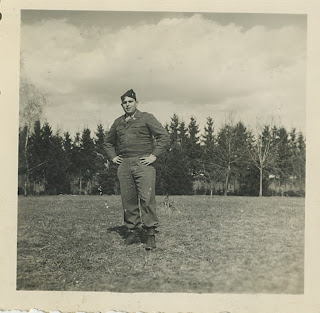 Little did Dad know when this photo was taken that he would spend nearly 30 years of his life serving his country in the Army.

According to my Mom, Dad told her he would serve a year or two.

When she asked him much later whatever happened to serving a year or two, his response was that the Army was the only life he knew.

The Army was all we knew too. Our family lived on military bases in Kentucky, Kansas, California and Alabama.

We lived in France twice, once before I was born and once after. Each trip to France, a new son was born to my parents.

My brothers Bob and Pat were both born in France, about seven years apart. The rest of us were all born on military bases across the country.

We lived in Wisconsin during one of Dad's deployments to be closer to Mom's parents and relatives. I don't remember much from that time, but I'm sure it made Dad's absence much easier for Mom.

People sometimes ask what it was like growing up as an Army brat. If you weren't there, it's hard to describe.

We moved every few years, like most military families. We didn't know any different and all of our friends were in the same boat.

We made new friends wherever we went and sadly bid them farewell as our dads went off to a new adventure.

Military brats are taught from an early age to have a sense of pride in America that you don't see much anymore.

We were also proud of our Dad, but didn't really understand a lot about his work. We knew that he was gone a lot. Sometimes he was just at work, but other times he was around the world.

Once in a while, we got to talk to Dad on the phone. I remember that we had to say, "Over" each time we were done saying something to him.

We wrote letters to share our lives with Dad when he was deployed and he wrote back about his life. He kept his letters fairly brief and the tone light.

I still have every letter and postcard Dad sent me while he was gone. I also still have the sense of pride in America that Dad's service instilled in me. 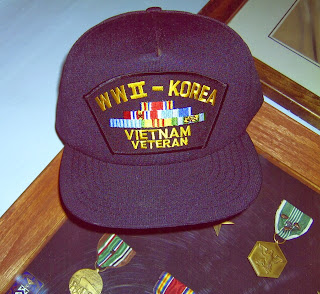 Thanks for your service, Dad! You'll never know how much your life in the Army affected all of us in ways seen and unseen.

I'm a proud Army brat who will always be proud of my Dad and the country he served.

Veterans Day is about honoring all who served our country, in times of war and peace.

From the oldest veterans to those currently serving in countries far from home, I salute you.

Your service to America secures the blessings of liberty for all of us. May your love of country live in the hearts and souls of all Americans today and every day. 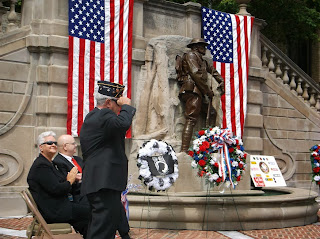 Posted by Sandy Wallace at 3:56 AM