Life Rocked When I was Little 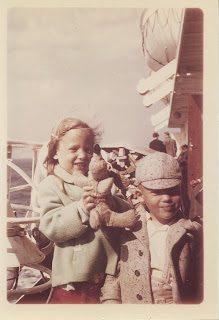 As I read through what others had written, it became clear that many of the Twitterers are much younger than me.

It was also clear that their childhoods filled with Sesame Street, Power Rangers and Nichelodeon may have been wonderful, but they didn't rock.

When I was little, life rocked. I had my black-nosed doggy and I felt that I was invincible.

Black-nosed doggy accompanied me on all of my adventures and so did my little brother Mike.

We had a black and white TV where my favorite dog Lassie appeared. Lassie.net and other media sources say that Timmy came onto the Lassie show in 1957, the year I was born. 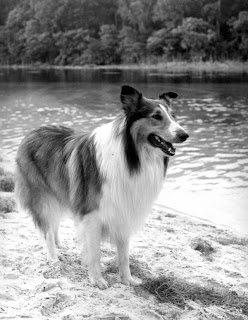 Many people don't know that Lassie was actually a series of male dogs.

I found many photos of Lassie on a Google search, but none was exactly right.

The photo that I most remember of Lassie was at the end of each show when Lassie waved good-bye with her paw.

I would stand at the TV, shaking paws with Lassie and crying like crazy because 'my' dog was going away.

I found a couple of photos of Lassie with her paw up to shake, but they were in color, something our TV didn't have back in the day.

We didn't have pets in our family. Dad was in the Army, we moved a lot and I don't think Mom had the desire to care for pets. Lassie was my first dog, followed by Rin-Tin-Tin. 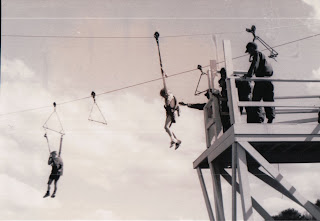 Like Lassie, I was afraid of nothing - well, not counting the dark.

Before there was such a thing as ziplines, we were the cool kids AKA Junior Paratroopers as we zipped down this line.

We rode our bikes with no hands, build forts in the woods, climbed way up high in trees, all without adult supervision.

Cool kids grow up to be cool 'tweens and teens and I was no exception - or so I thought. My little sister thought that I was the most awesome of all. 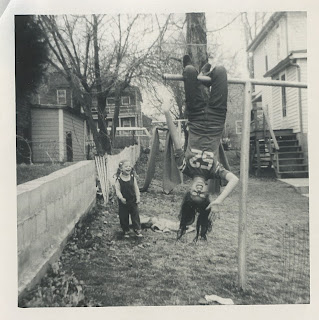 It may seem amazing to today's youth and teens that our lives were so filled with adventure.

We didn't have computers, video games or many of the other toys that kids enjoy now.

The great outdoors was our playground. We could be found hanging out in the backyard, playing football in the street or playing freeze tag or Ghosts in the Graveyard after dark in our neighborhood.

It didn't take much to make us happy and we didn't expect someone else to be responsible for making us happy.

We made our own fun and had a blast living life to the fullest. Life rocked when I was little. Come to think of it, life still rocks. Although I'm not a kid anymore, I'm still a kid at heart and always will be.

When I see a giant boulder or a perfect climbing tree, I feel the need to climb it and see how high up I can be. Being king of the world wasn't just for the long ago me. 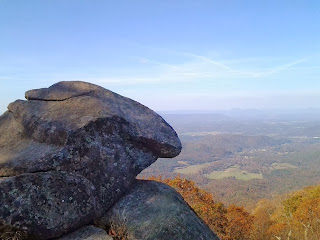 Adventure is still the name of the game for the me of today.

Life still rocks and I love living it to the fullest and making memories wherever I go and whatever I do.

Until the next memory is made, I'll take what I can get when I can get it and do the best I can to face each day with a smile on my face, a prayer on my lips and a song in my heart.

Blogging Grandma Sandy, signing off for now.
Posted by Sandy Wallace at 8:07 PM