A Tribute to Grandparenting: Yesteryear and Today 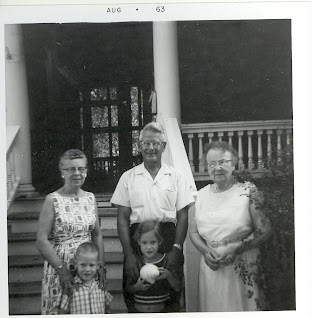 I feel so blessed that photography was one of my Dad's hobbies when I was a child. If not, this photo of me and my younger brother, Mike, with our maternal grandparents and great-grandmother would not exist.

As an Army family, we lived far away from both sets of our grandparents and saw them rarely. When we visited Wisconsin, where they all lived, there were happy family gatherings and time spent with cousins and with our grandparents.

During one period of time, we lived in Wisconsin for a while. I don't remember a lot from those days but have a photo taken of me and my Grandpa on the stairs of our house. 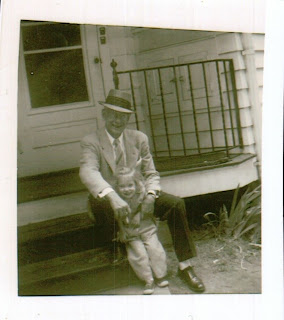 This photo brings back happy memories of my grandpa, whose love for his grandchildren was obvious to all. By career, Grandpa Kraus was a high school principal and I'm sure his love was equally felt by the students he mentored.

My Mom's parents lived in the same house for all of our lives and I have many happy memories from our visits. We played cards on the porch, played in the back yard and listened when we could to the stories the adults told.

There was always a wonderful smell in the air at their house. As an adult, I think it was probably from cookies baking. As a child, I identified the scent as 'Grandma's house.'

When we visited Wisconsin, we also visited my paternal grandparents, who lived on a lake. I don't have any photos of me with my Dad's parents but do have one photo of me running to the boats at the lake. I'm sure this photo was also taken by my Dad. Kids did their own thing in those days. The adults talked while the kids played. Everyone gathered together to eat meals. 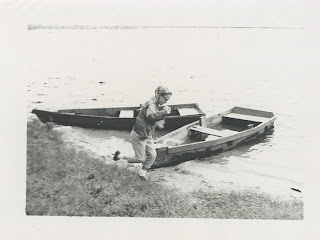 I wish we had lived closer to our grandparents so that I would have known them better. But, we kept in touch with them by writing letters.

During my years in Girl Scouts, I had to learn more about how my grandparents grew up. I wrote letters to Grandma and Grandpa Kraus and to my mom's grandmother.

Each sent me a letter in return, telling about what life was like when they were growing up. Grandpa Kraus' letter spoke about how good kids had it "these days" compared to when he was a child.

As a young adult, I continued to write to my grandparents and was blessed that they were able to stay in touch. Sadly, my last visit to my grandparents was when I was a teen. I don't have a good photo of me with either of my grandparents from that visit, but I'm sure that my Dad does. I do have a photo I took of my Grandma with my younger brothers and some of the boy cousins. Grandma was so short that she looked more like a playmate than a grandmother. I also have a photo of my Grandpa with two of my cousins from that visit and many other photos I took with my own camera. 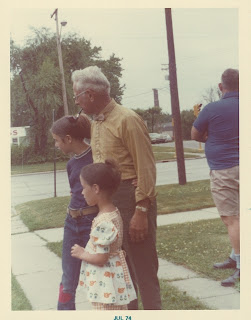 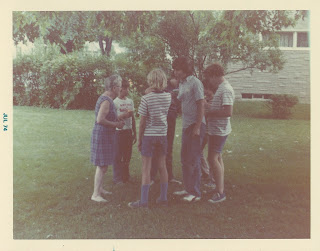 After I married and moved away from home, my vacations were spent going to visit my parents, much as my parents' vacations had been spent visiting their parents.

On visits back home, it was hard to get photos of my Mom with her grandchildren because she hated having her photo taken. I have many photos taken of Dad with my kids and all of their grandchildren. There is still always a baby or toddler around and they all seem to be drawn to Dad. My children were blessed to have their other set of grandparents living nearby so they were able to see them often. 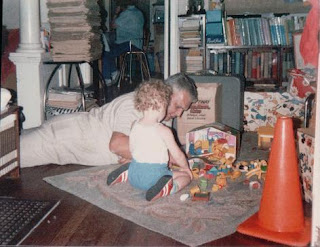 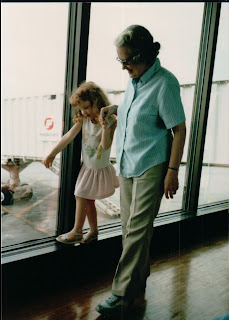 When my first grandson was born, I cried tears of joy. I was in the room for his birth and was overwhelmed with emotion. I was blessed to spend a lot of time with my older grandson because his parents worked overlapping schedules. As he got a little older, every Wednesday was marked on our calendar as "Grandma House Day" and I have many happy memories of time spent together with him. 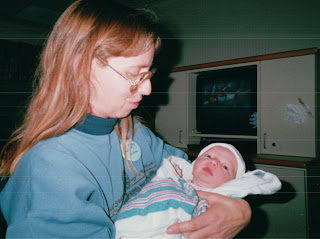 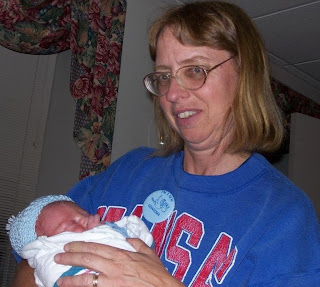 By the time his younger cousins were born, I was an old hand at being a Grandma. Because my son-in-law was deployed when my younger grandson was born, my daughter and grandson lived with us for a period of time. I loved coming home at the end of the day to a baby in the house. First words and first steps are among the joys of living with a little one. Being Grandma instead of Mom to my grandson meant that I could do the fun grandma things and not all of the work things that moms do. 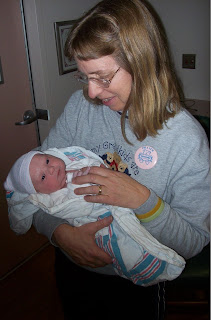 Later, after my granddaughter was born, the entire family lived with us for a few months when they were between homes. They now live just a few blocks away so we see them often. Playing Candy Land and Fish, helping them ride bikes in the driveway and baking cookies are among the fun activities we enjoy together. Being a working grandma wasn't in my plans but it's the hand life dealt me so I deal with it. We see all of the grandkids as often as we can and love them immensely. Although Kenny isn't their biological grandpa, you'd never guess it from the way they interact. The two younger grandkids come running for 'Pa' and are very excited when he's here and not on the road.
I have taken thousands of photos of my grandchildren and spent countless days sharing time together and making happy memories. Life is good when you're a grandparent and I'm truly blessed.

On this special day known as Grandparents Day, I owe an immeasurable debt of gratitude to our family's grandparents who came before me and showed the way to be loving grandparents. To my grandparents and parents, thanks so much for the examples you set.

I also owe a huge debt of gratitude to my daughters and sons-in-law for allowing me to have such a huge role in their children's lives. Happy Grandparents Day to all grandparents everywhere. May you always enjoy the love and joy of the grandchildren in your lives.

Posted by Sandy Wallace at 7:49 AM