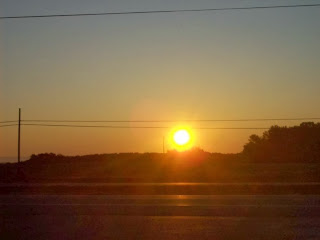 American country music singer Tim McCraw released the song, "Live Like You Were Dying" in June 2004. The song rose rapidly to the top spot on the country music charts.

The song tells the story of a man who is in his early 40s when his father is diagnosed with a life-threatening illness.

As the reality of the situation sinks in, the son takes away the message to live his life like he was dying, doing all of the things he wants to do like skydiving and mountain climbing.

Not many of us live our lives like we are dying. Instead, we slog through our daily lives, marking the passing minutes, hours, days and years as we wait for moments in time including: the weekend, vacation, the holidays, the kids getting married, the house being paid off and retirement.

I tell people that I was blessed to grow up in a family where nobody died. I wasn't exposed to death much during my childhood.

My grandparents all lived long lives. I don't remember anyone on either of my parents' sides of the family dying until I was an adult.

As an adult, I've struggled with the concept of death, especially sudden death. Although I truly believe that eternal life with God awaits those who die, death is so final and cruel.

I've lost numerous friends and relatives to death as an adult. The pain of each loss was different, but each of the deaths left behind family members and friends struggling with their loss.

Since then, we have known several other young people who have died unexpectedly. This week, a wonderful, kind, talented and loving young man we've known for years died suddenly, leaving grieving family and friends to struggle with his loss.

The grief that accompanies death is always difficult, but somehow it seems worse when the person who dies is young.

Nearly all of the young people I've known who have died enjoyed many great experiences in their short lives. However, the unfairness of death still looms larger than life.

Parents aren't supposed to outlive their children. It goes against the unwritten rules of the universe and against our view of how life should operate.

Sometimes the death of a young person leaves family members and friends angry with a God who they feel cheated them out of a future with their loved one.

When a young person dies with much of their life left unlived, their goals unaccomplished, and their dreams unfulfilled, it seems unfair to most of us.

Maybe some of the unfairness we feel is based on our own unfulfilled dreams, goals we haven't accomplished, relationships that haven't worked out in our own lives.

The closing hymn at the memorial service Saturday was one of my favorites, a hymn I chose years ago to be used at my own funeral: "On Eagles Wings."

"And He will raise you up on eagle's wings,
Bear you on the breath of dawn,
Make you to shine like the sun,
And hold you in the palm of His hand."


Like the lyrics of "Live Like You Were Dying," the lyrics of "On Eagles Wings" imparts a message about death. Although the messages are different, they are still similar.

Mark Twain wrote, "The fear of death follows from the fear of life. A man who lives fully is prepared to die at any time."

Maybe the answer to putting the fear of death behind is simple: to live like you are dying. Instead of marking time, embrace life and make memories along the journey.

Until the next memory is made, I'll take what I can get when I can get it and do the best I can to face each day with a smile on my face, a prayer on my lips and a song in my heart.
Posted by Sandy Wallace at 8:19 PM