Halloween Memories Through the Years 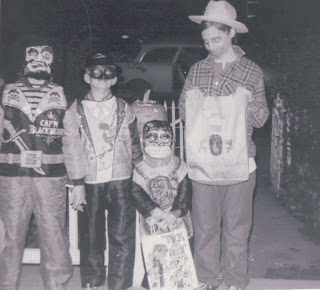 I have always loved holidays. Although my favorite is Christmas, Halloween is filled with many happy memories for me too.

In this photo, I spent hours creating my own Halloween bag, designed like a Coors beer can to complete my bum costume.

My younger siblings were wearing the best of Halloween costumes from back in the day, including Nancy in the gorilla costume we all wore that featured a moving mouth for easier eating of Halloween candy.

The only bad Halloween memory I have is the year my brother Mike was sick. My youngest brother Pat and I carried three bags with us to bring home candy for Mike. Instead, we were jumped by a group of boys and young men, who took our candy and our pride, leaving the clown costume my Mom had made for me that year dotted with my blood from a minor wound suffered when I didn't want to give up the candy. 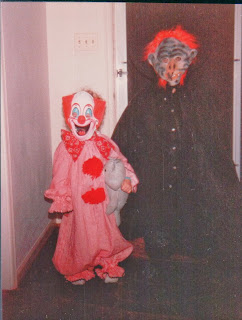 The fun didn't end when I grew up. One of the best things about being a parent is reliving your childhood as you share in your kids' fun.

I always dressed up when the kids were younger and still do most of the time.

Whether handing out candy, helping with parties in their classes or trick-or-treating in the neighborhood, I was usually spotted in a witch's costume with some sort of spooky mask.

Jenny the clown was carrying a Care Bear I made for her in this photo, taken when I was a mother with only one child.

Carving pumpkins was part of the fun when the kids were younger too.

Before the days of pumpkin patches and corn mazes, pumpkins were carved at home. Usually we carved pumpkins a day or two before Halloween. 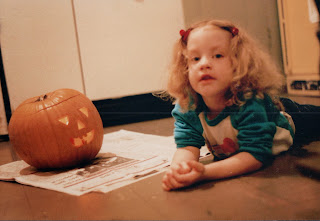 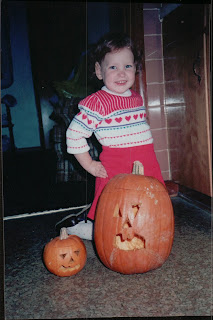 I made a lot of the kids' costumes when they were little, including Jack's first clown costume, which he wore trick-or-treating when he was just two weeks old. 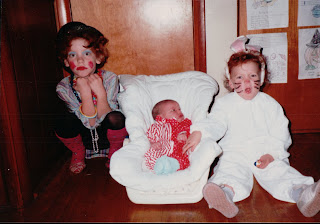 We decorated our yard each year, a tradition that continues to this day.

Although my yard decor isn't quite as elaborate as it was when the kids were young, it's still fun to put out all of the Halloween decorations.

As a grandparent, it's been fun to have the grandkids help me decorate the yard for Halloween.

We usually have a Halloween party with lots of fun and spooky foods for all. 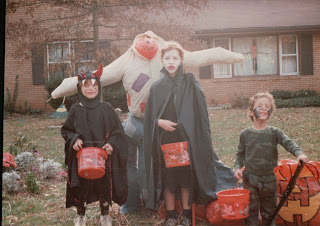 Trick-or-treat was the best part of Halloween for me when I was a kid.

Going from house to house and begging for candy - what could be better than that?!?!

When we lived at Ft. Leavenworth, there were a couple of houses where we had to do tricks to get our treats.

Cartwheels were always my trick of choice when I was called upon to perform for my candy. 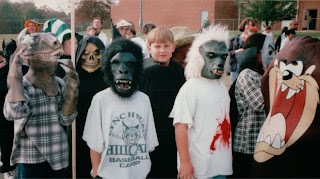 Boys are different from girls when it comes to Halloween costumes.

My daughters usually wanted cute costumes with princesses, unicorns and other fun characters, although some years there were witch and ghoul costumes too.

My son and his friends always chose spooky costumes. At Sandusky Elementary School, one of the best parts of Halloween was the costume parade on the middle school track.

I've enjoyed reliving Halloween memories as I've enjoyed trick-or-treating and Halloween parties with my grandchildren through the years too.

Halloween is a great time to make family memories. Make some memories with your family this year for Halloween.

Until the next memory is made, I'll take what I can get when I can get it and do the best I can to face each day with a smile on my face, a prayer on my lips and a song in my heart.

Blogging Grandma Sandy, signing off for now.
Posted by Sandy Wallace at 6:13 AM