A Veterans Day Tribute to My First Hero 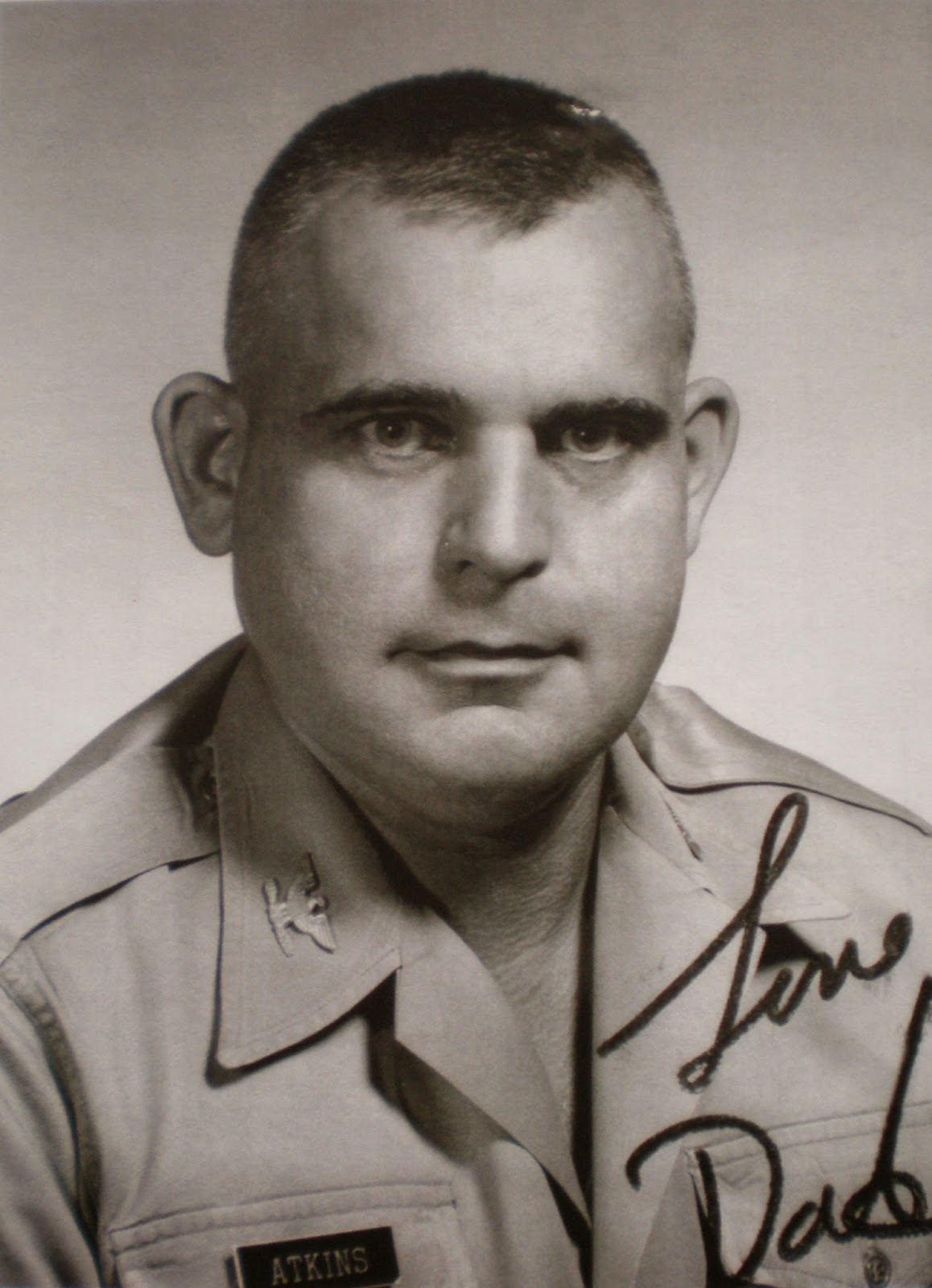 What makes a man a hero? Bravery, integrity, strength, courage against all odds, selflessness, perseverance, sacrifice and honor are all traits I found in my first hero, the man I called Daddy.

My Dad taught me many valuable life lessons - some with words, but most through his actions. By watching Dad's actions, we all learned the meaning of patriotism.

Dictionary.com defines patriotism as "devoted love, support, and defense of one's country." Dad devoted most of his working years to serving America, at home and abroad. 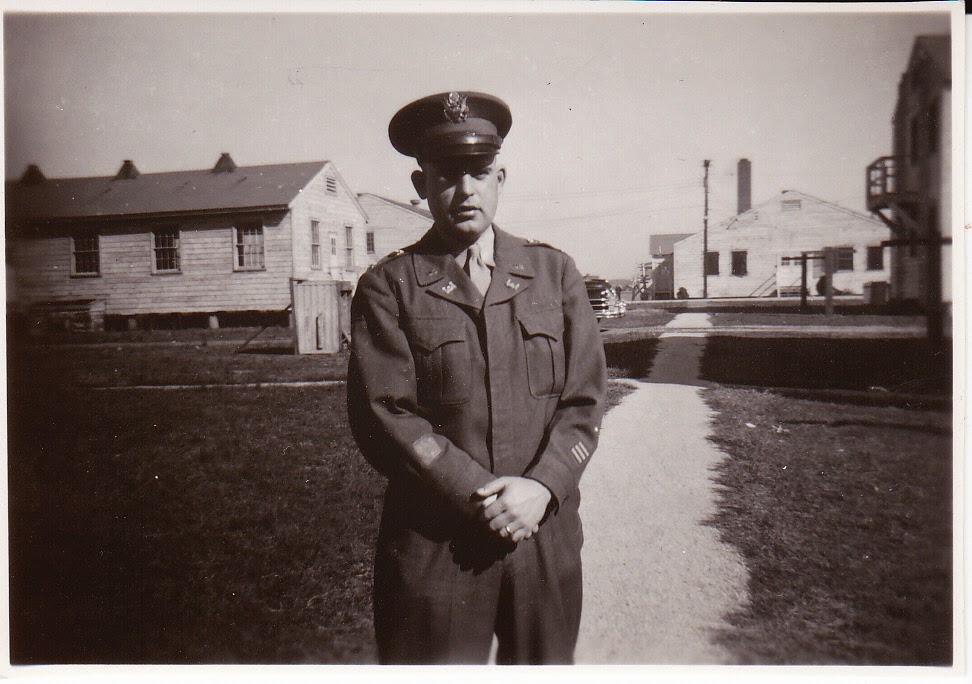 Most of Dad's military life took place out of the sight of his family. Unlike most civilian jobs, kids generally aren't invited to visit military parents on the job.

The old saying goes, "If the Army wanted you to have a family, they would have issued you one." Somehow, Dad found time for his family, despite his career.

As a child, I had no idea of the dangers Dad faced, especially when he was overseas. As an adult, I thanked God many times that Dad survived three wars, returning home to us after every hardship tour to pick up his life with family where he left off when he was deployed. 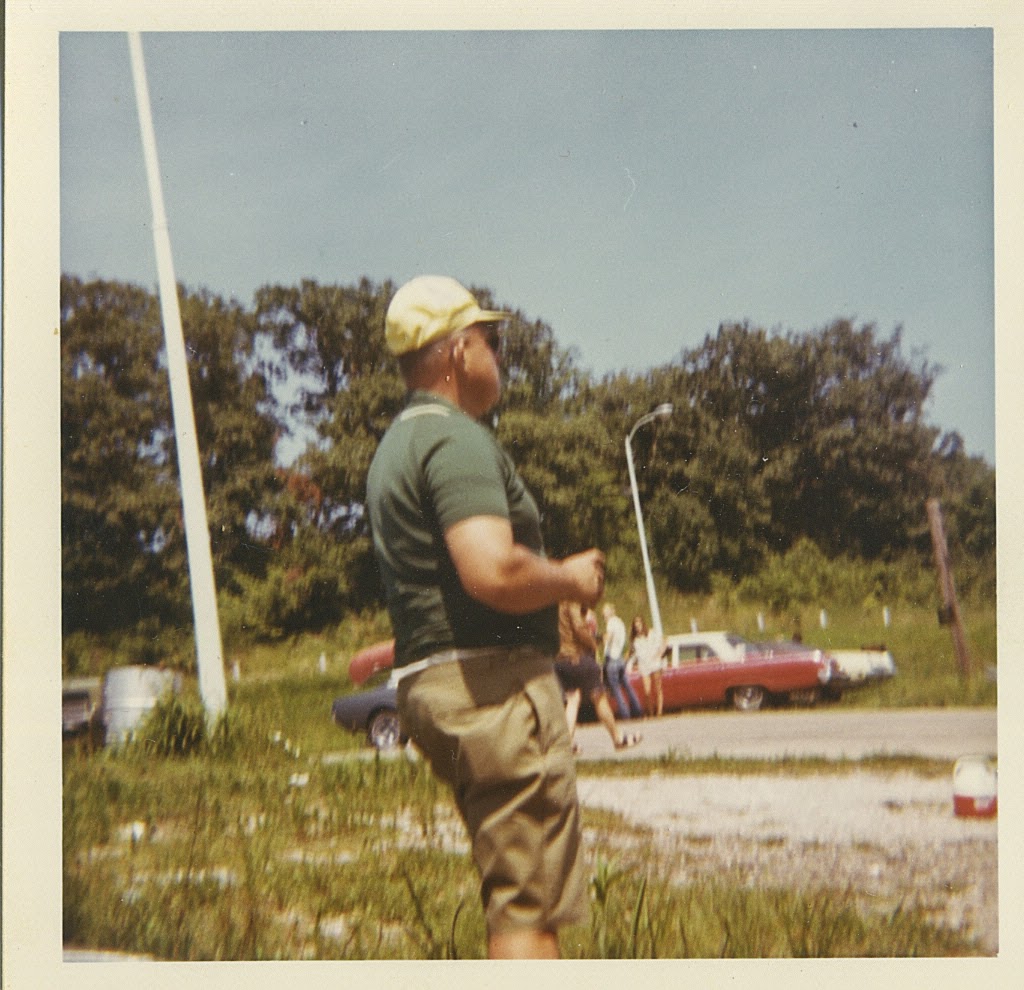 I don't have a lot of photos of the Daddy I remember from my childhood - the Dad who took us fishing in the canoe, taught us to bowl and play tennis, cooked big holiday meals and gave us rides on his back at the pool, diving underwater without warning to the child riding on his back. 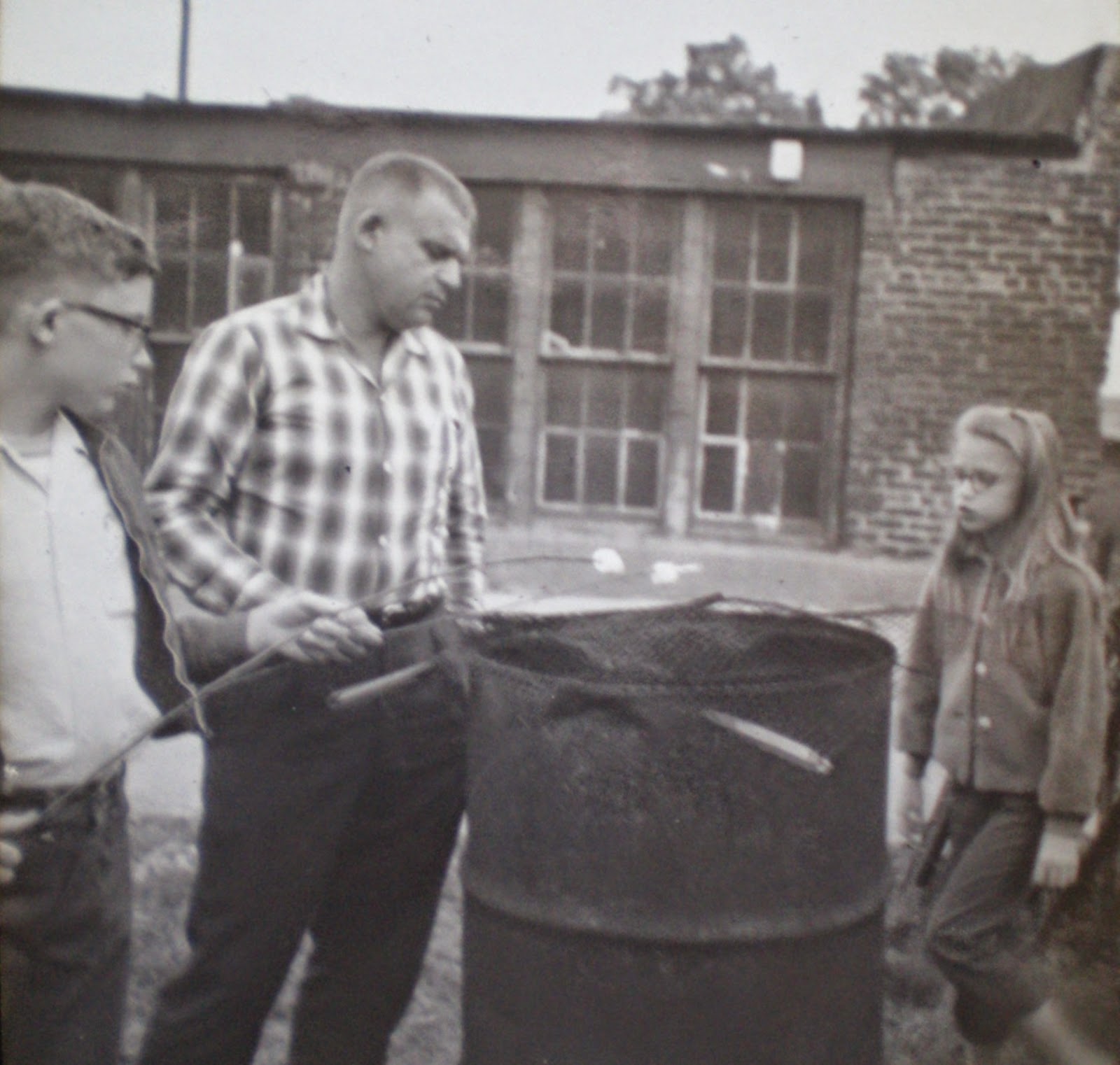 The Dad of my youth was a Boy Scout volunteer who was euqally comfortable feeding a crowd of scouts on a camping trip and cooking S'mores over the backyard incinerator with his kids.

When Dad taught us how to play tennis, we had to shag the balls we hit astray. When we were bowling, Dad never made fun of us for rolling a gutter ball, Instead, he would say, “I’ll give you a dollar if you can knock down the one on the other side.” 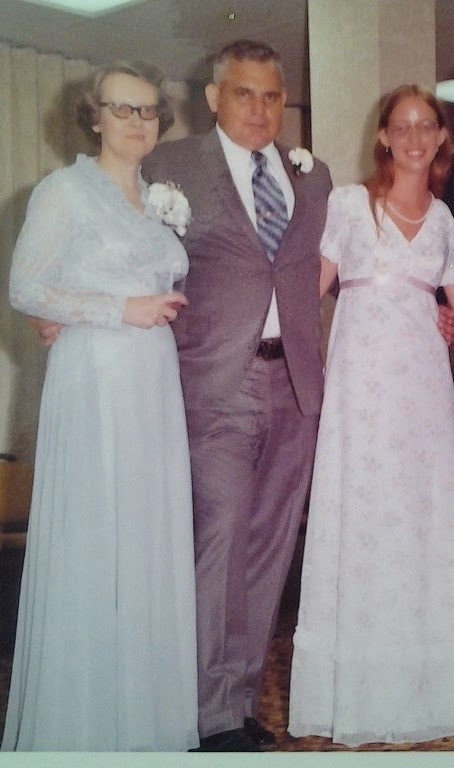 As I grew older, Dad taught me many other practical lessons, including how to read a wiring diagram and how to gap spark plugs. I was more than a little bit crazy in my teen years, but I always knew my parents had my back. Dad walked me down the aisle as my years as an "at home kid" came to an end. 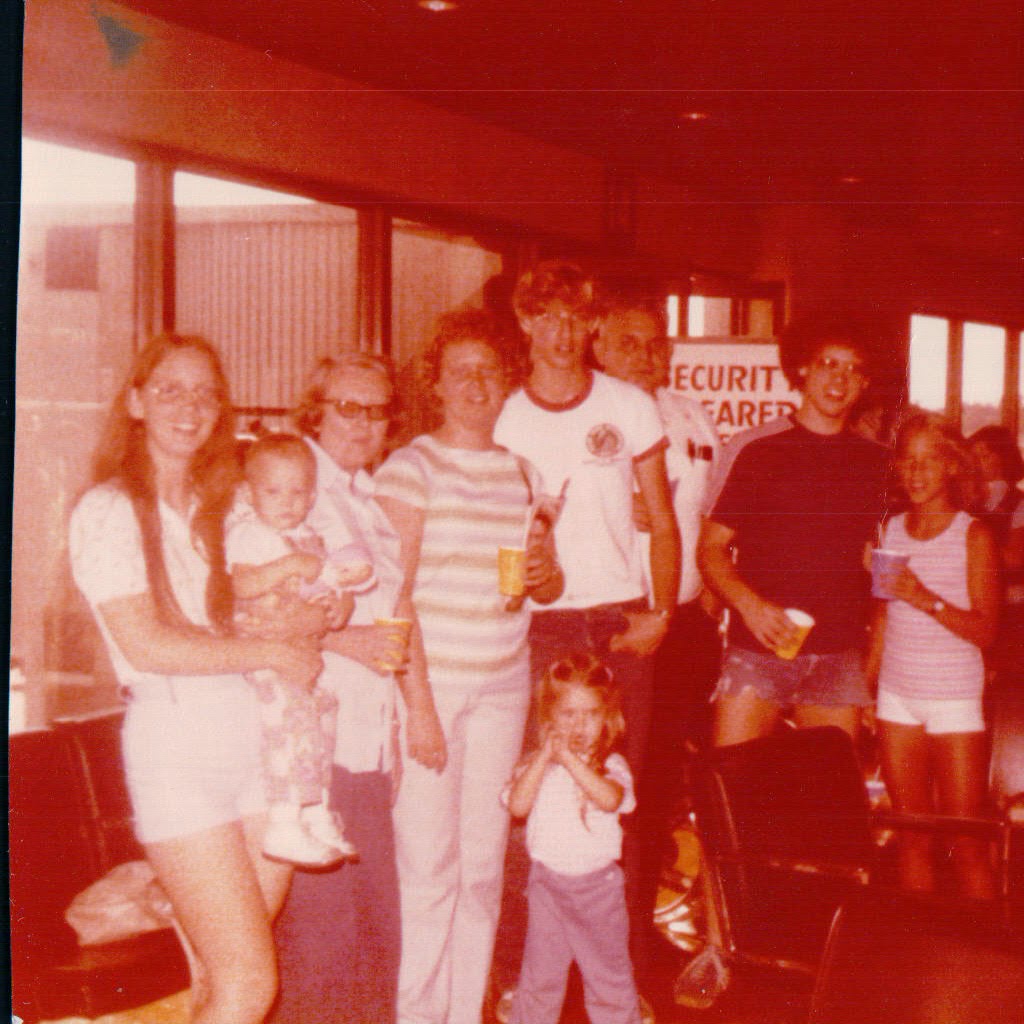 On my earliest trips home after moving to Virginia, there were still siblings living at home. Dad spent a lot of time at Boy Scout camp during the summer, with camp weeks often overlapping with my visits home. Dad always smiled and waved good-bye as Mom shed tears at each farewell. 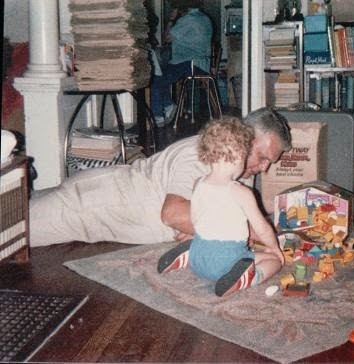 Dad could often be found on the floor when grandkids came to visit. Whether he was playing Little People or letting grandkids climb on his back, it was clear to see that Dad delighted in his grandkids. 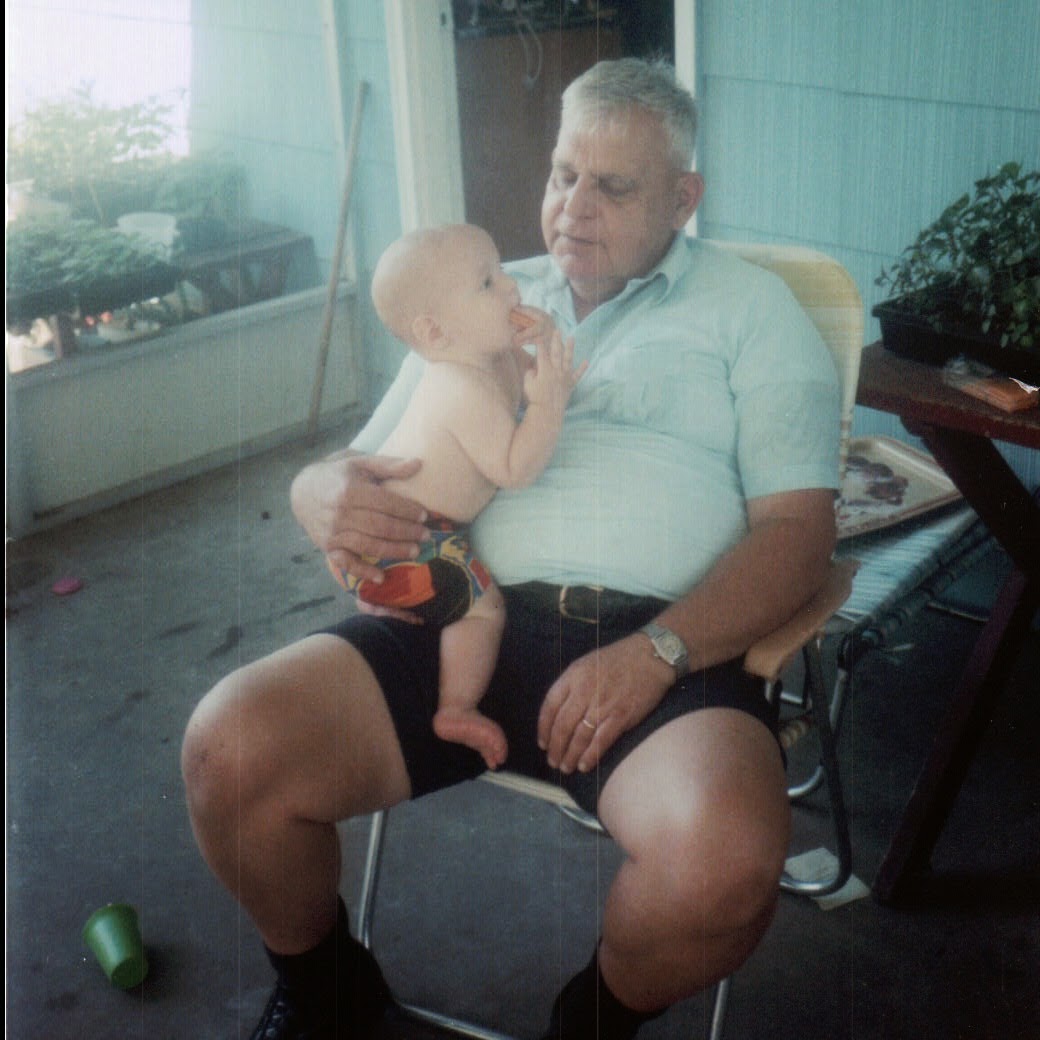 Although Dad enjoyed all of the grandkids, he especially loved the babies. At every family gathering, you would find Dad holding at least one baby, often making goofy faces and noises at them to make them laugh, as he did when we were little kids. 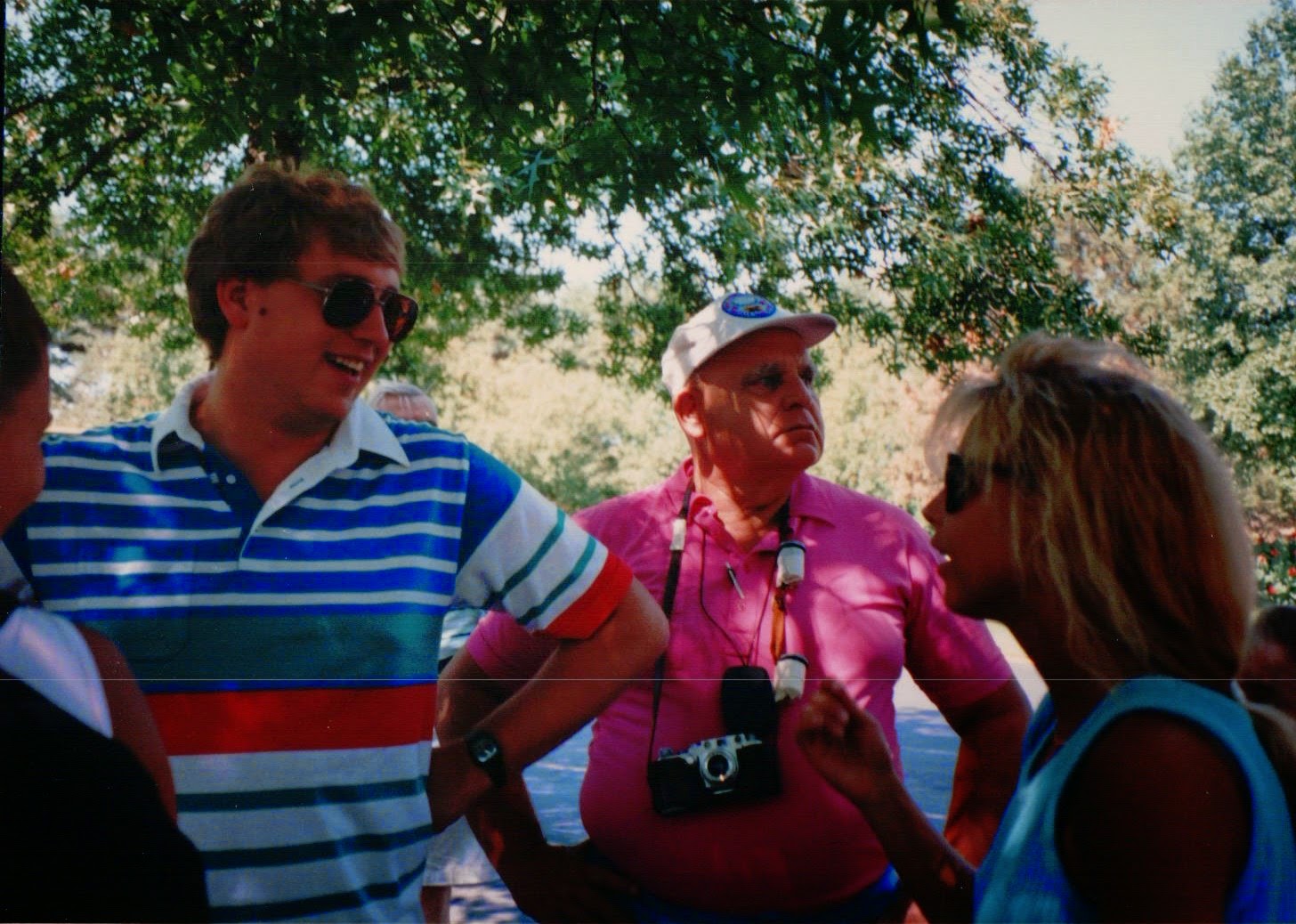 Summertime trips back home always included watergun fights, cookouts and a trip to Worlds of Fun, where Dad recorded the day on film and rode on various rides with the grandkids. 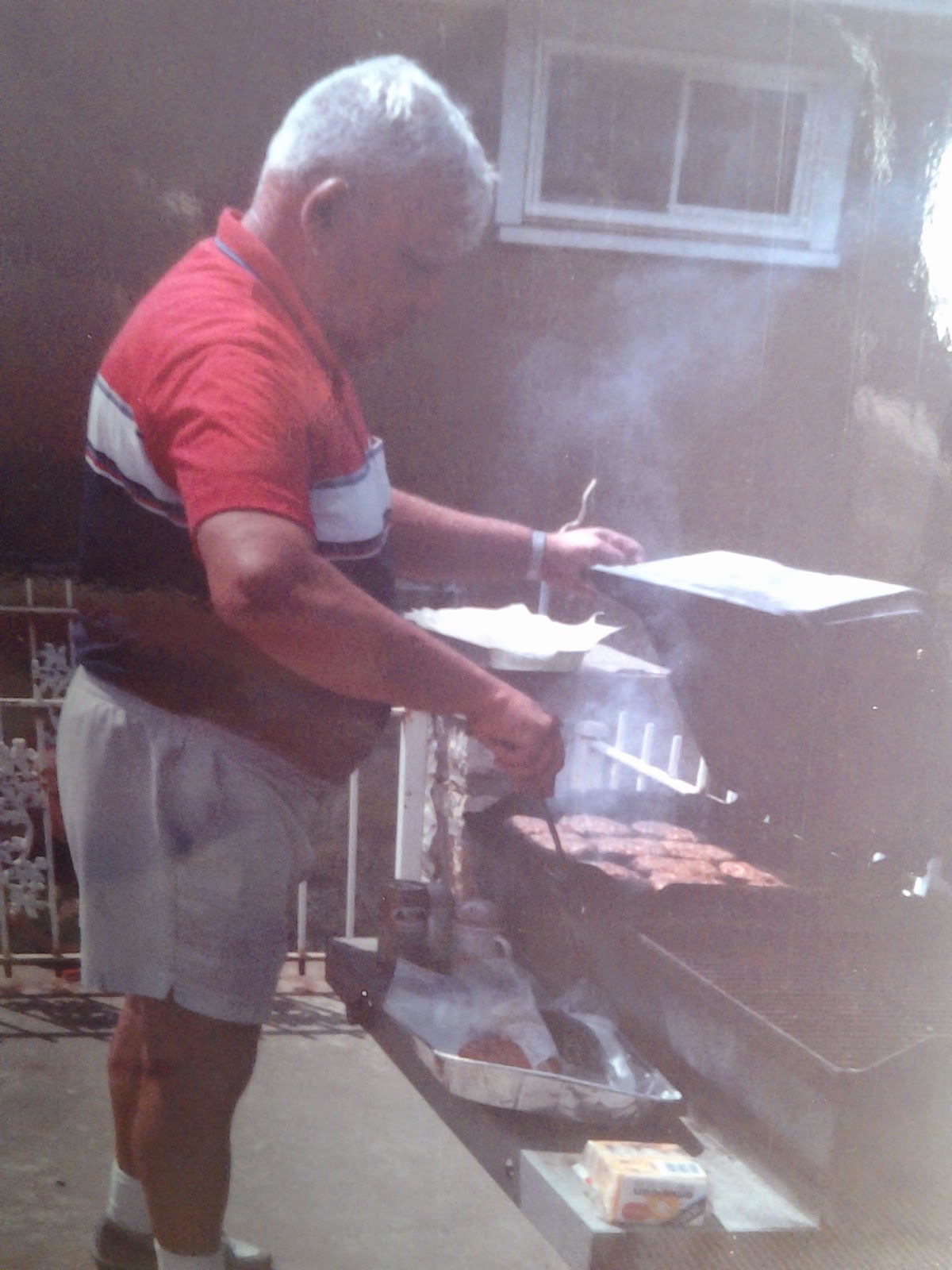 Dad was often the grill master at family cookouts. The burgers were always charred on the outside and pink on the inside, "the best way," according to Dad. 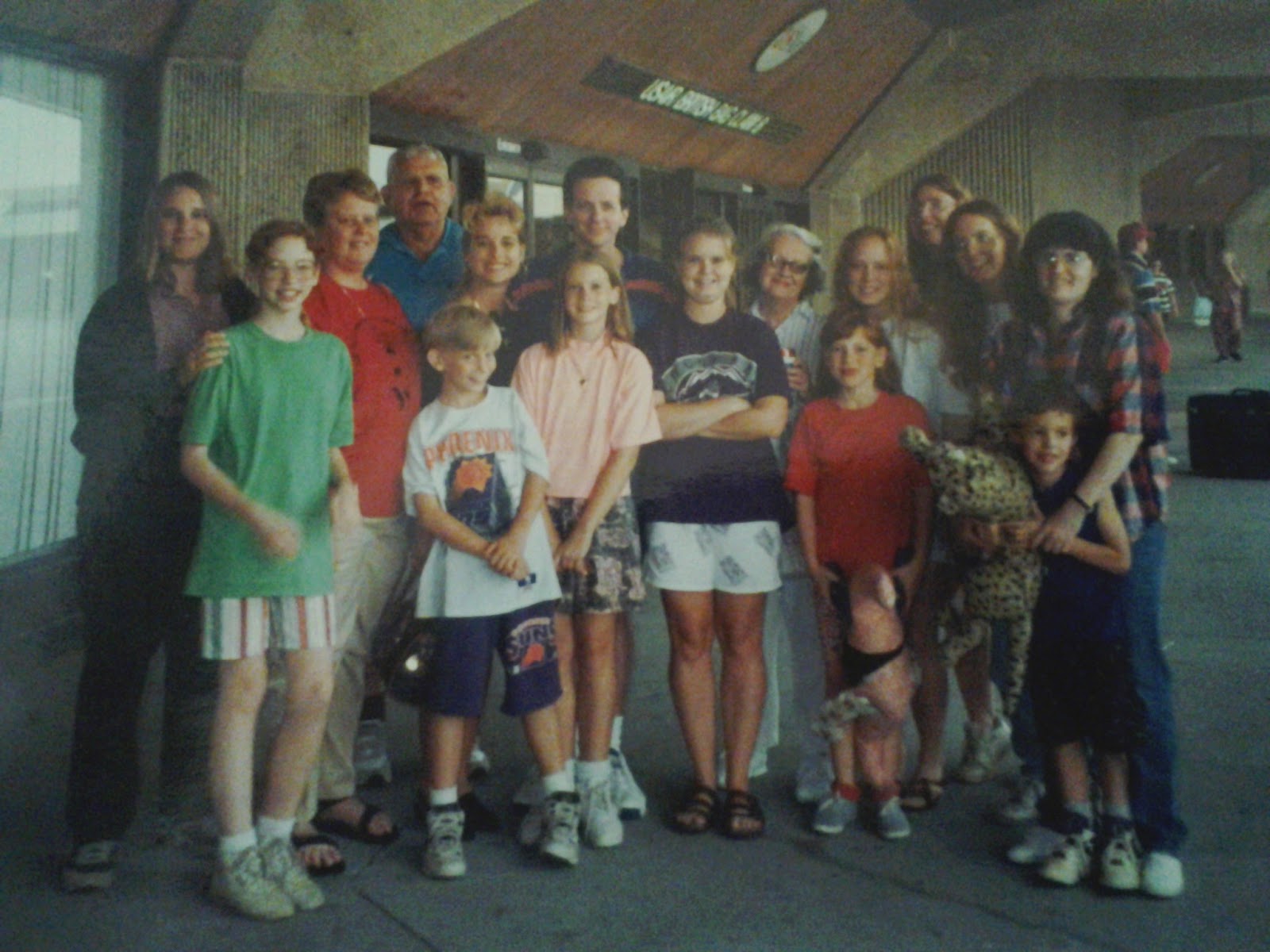 With such a big family scattered from coast to coast and beyond, it was rare for all of us to come home at the same time. In 1994, we all gathered together for our youngest sibling Nancy's wedding. 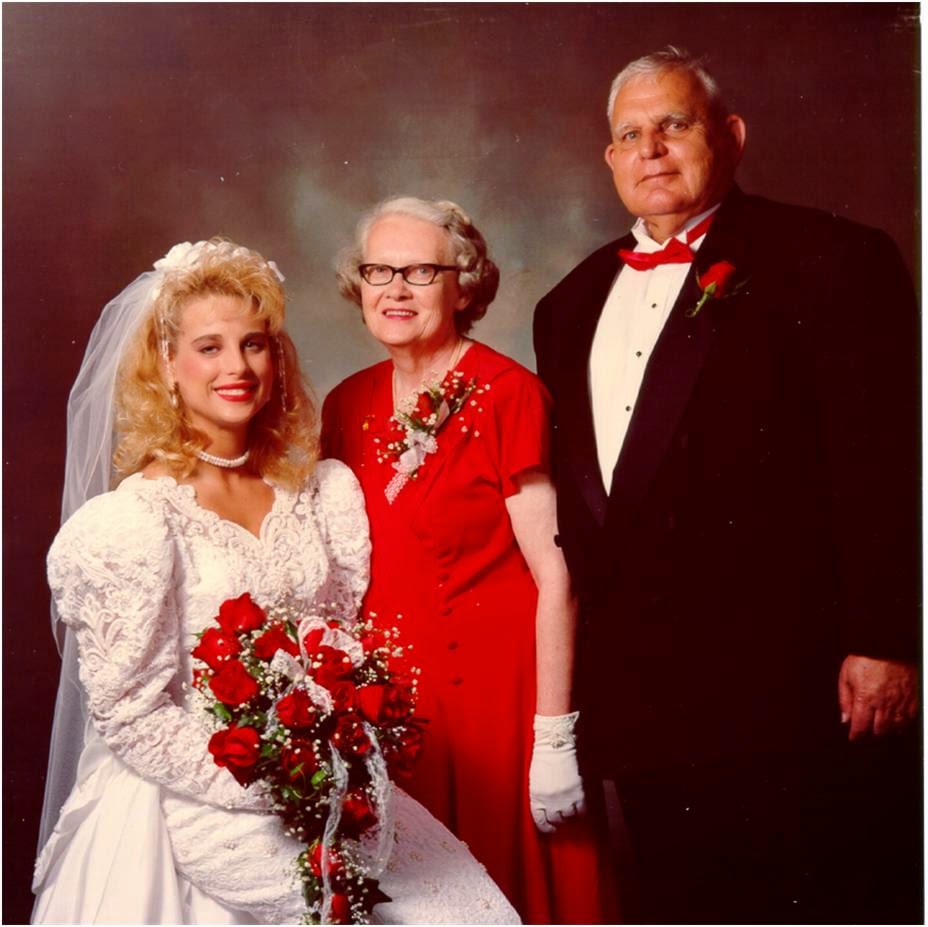 Following tradition, Dad walked Nancy down the aisle and danced with her at the reception. Dad looked almost regal at the festivities surrounding the wedding of his baby girl. 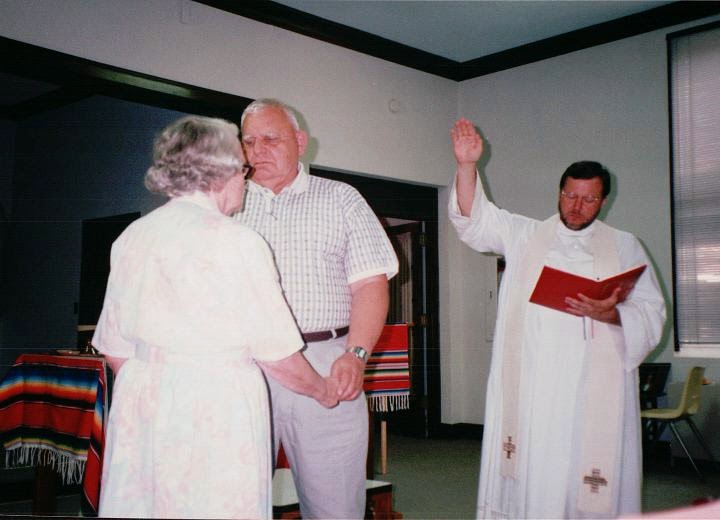 Dad and Mom renewed their wedding vows a few years later for their 50th anniversary. Father Bill McEvoy, who grew up with us kids, celebrated the Mass with Mom, Dad and our family. 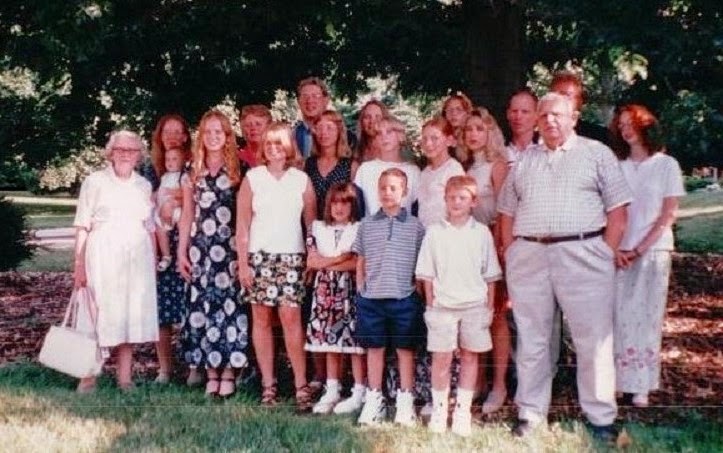 All of us kids and our children came home for the happy occasion, marked by many photos, including this one of Mom and Dad's growing family. 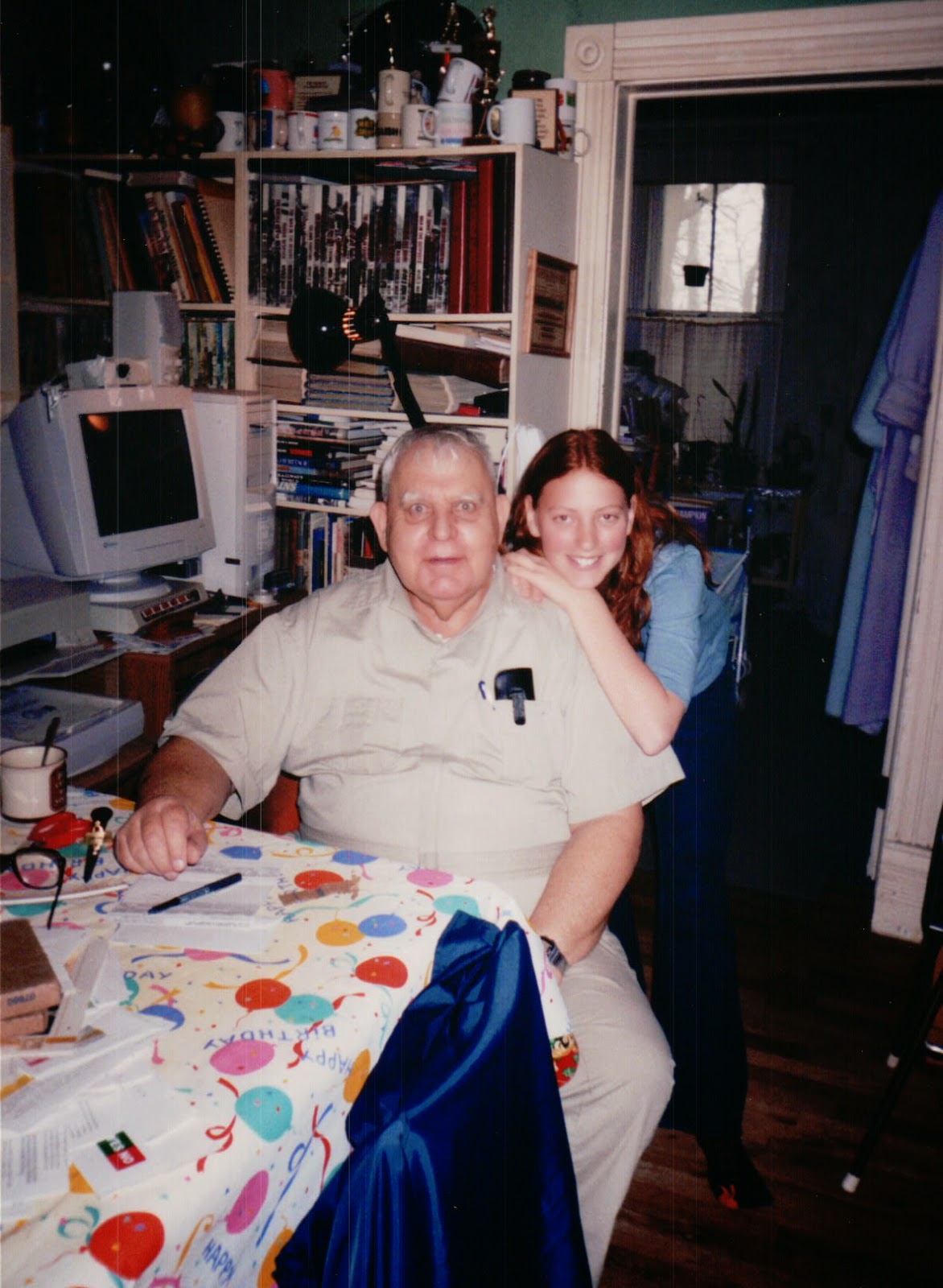 In 2000, Dad was diagnosed with cancer. We were all devastated. My kids and I went home for Dad's surgery, joining Mom and most of my siblings, nieces and nephews in the waiting room. Dad never complained, never showed any fear and, if he was in pain, didn't show it to any of us. 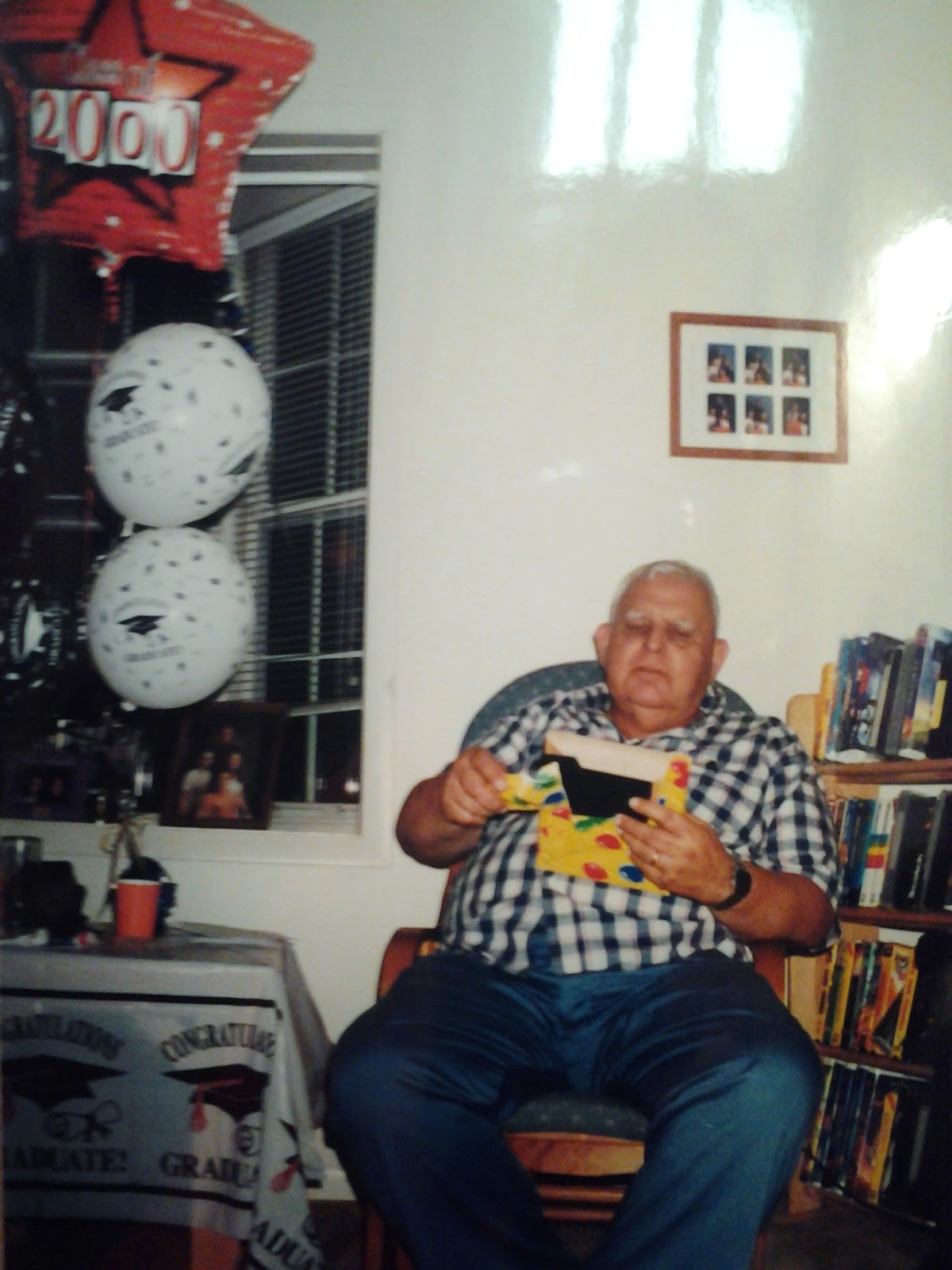 Dad kicked cancer's butt in 2000. Just three months after major surgery and treatments, Dad drove cross-country alone for my oldest daughter Jenny's high school graduation with a side trip to the World War II Museum in New Orleans. Mom flew in for the graduation with my older sister Kathy. After driving back home, Dad took a second road trip a couple of weeks later to Oklahoma for my niece's wedding, this time accompanied by Mom. 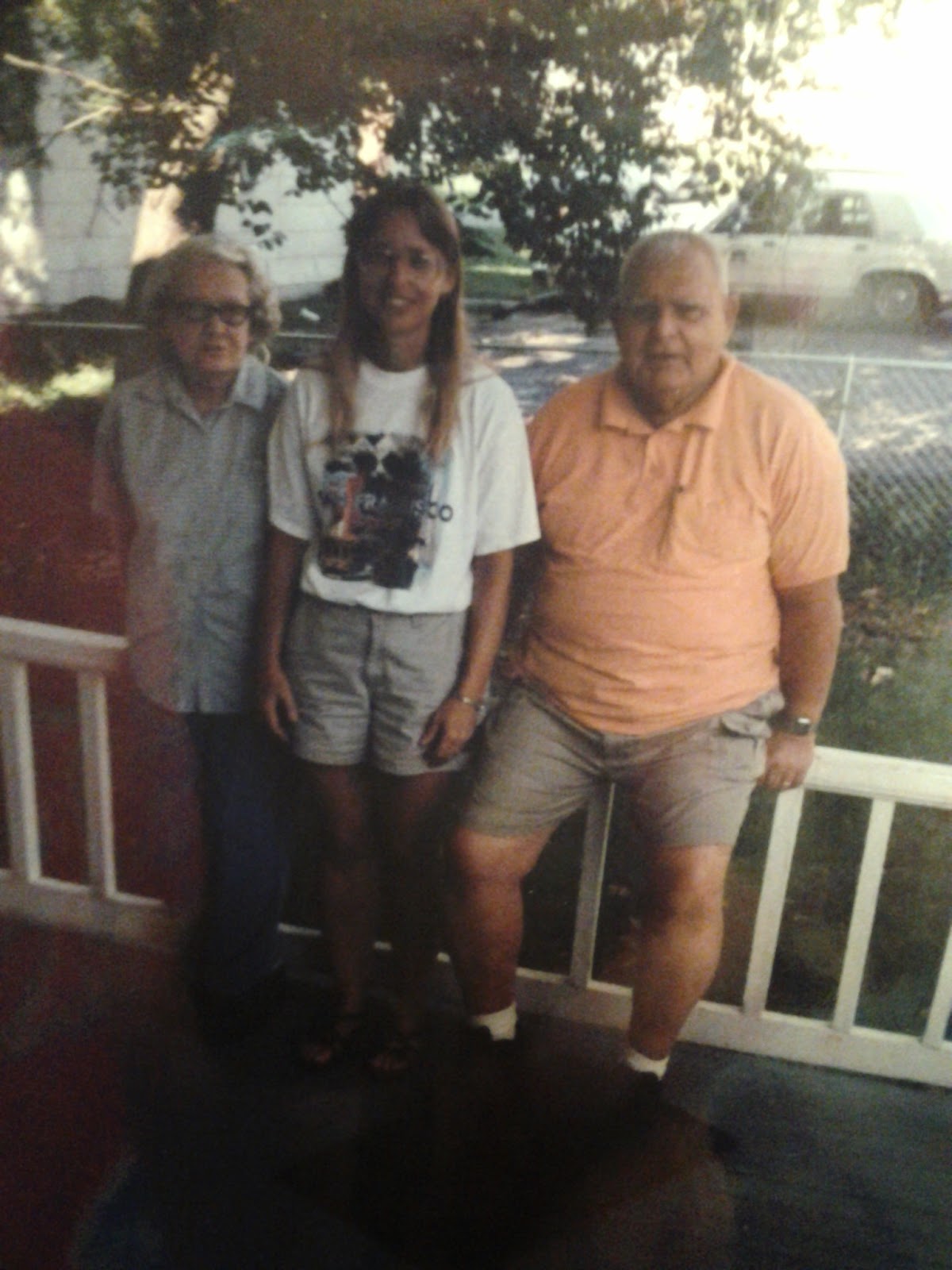 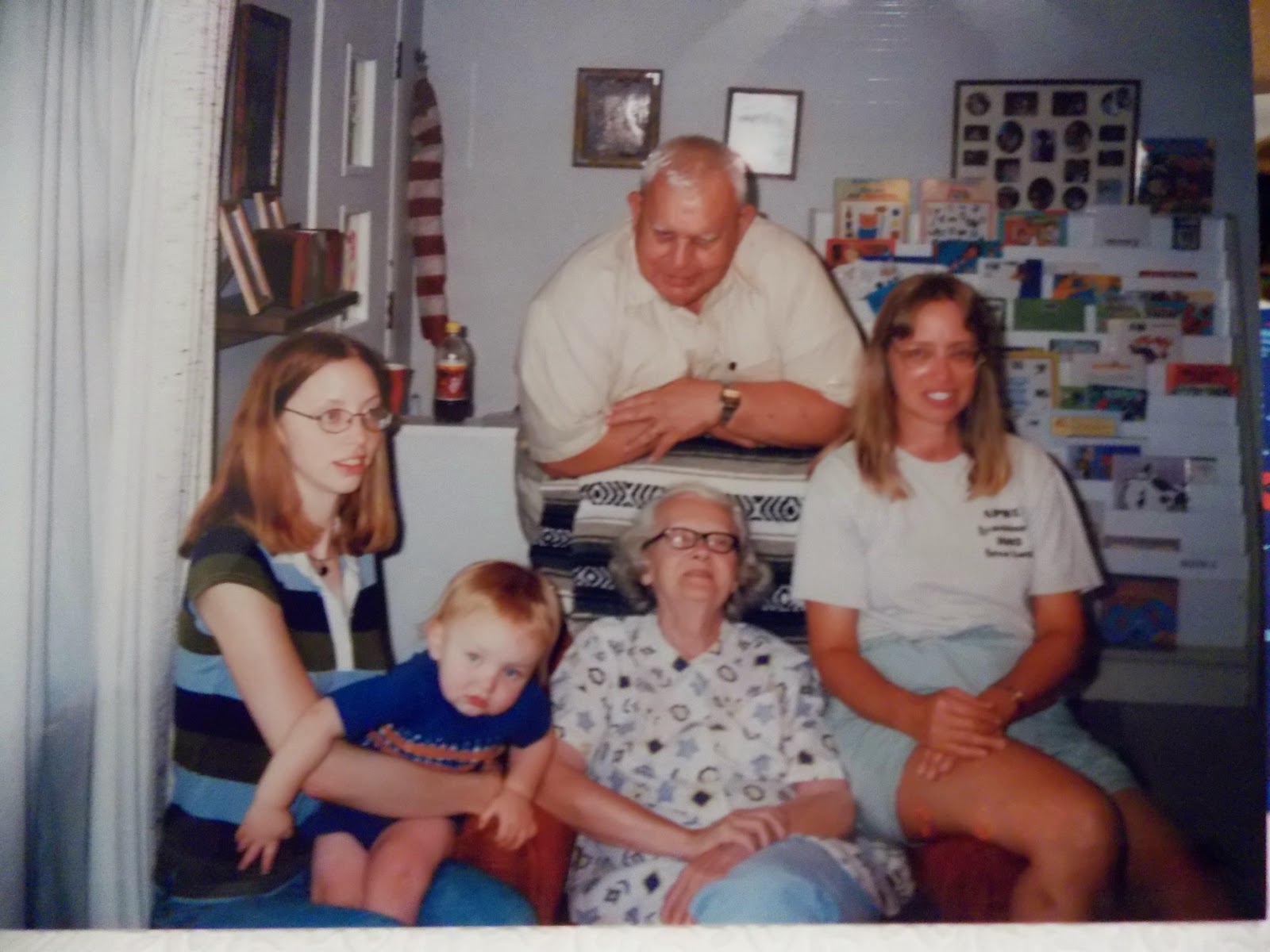 My oldest grandson, Kyle, was Mom and Dad's first great-grandchild. Kyle was just a baby when we visited Kansas in 2001 so he didn't come along. The following summer, Mom and Dad posed for four generation photos with me, Jenny and Kyle, who kept trying to get down. Dad was clearly amused by Kyle's antics. 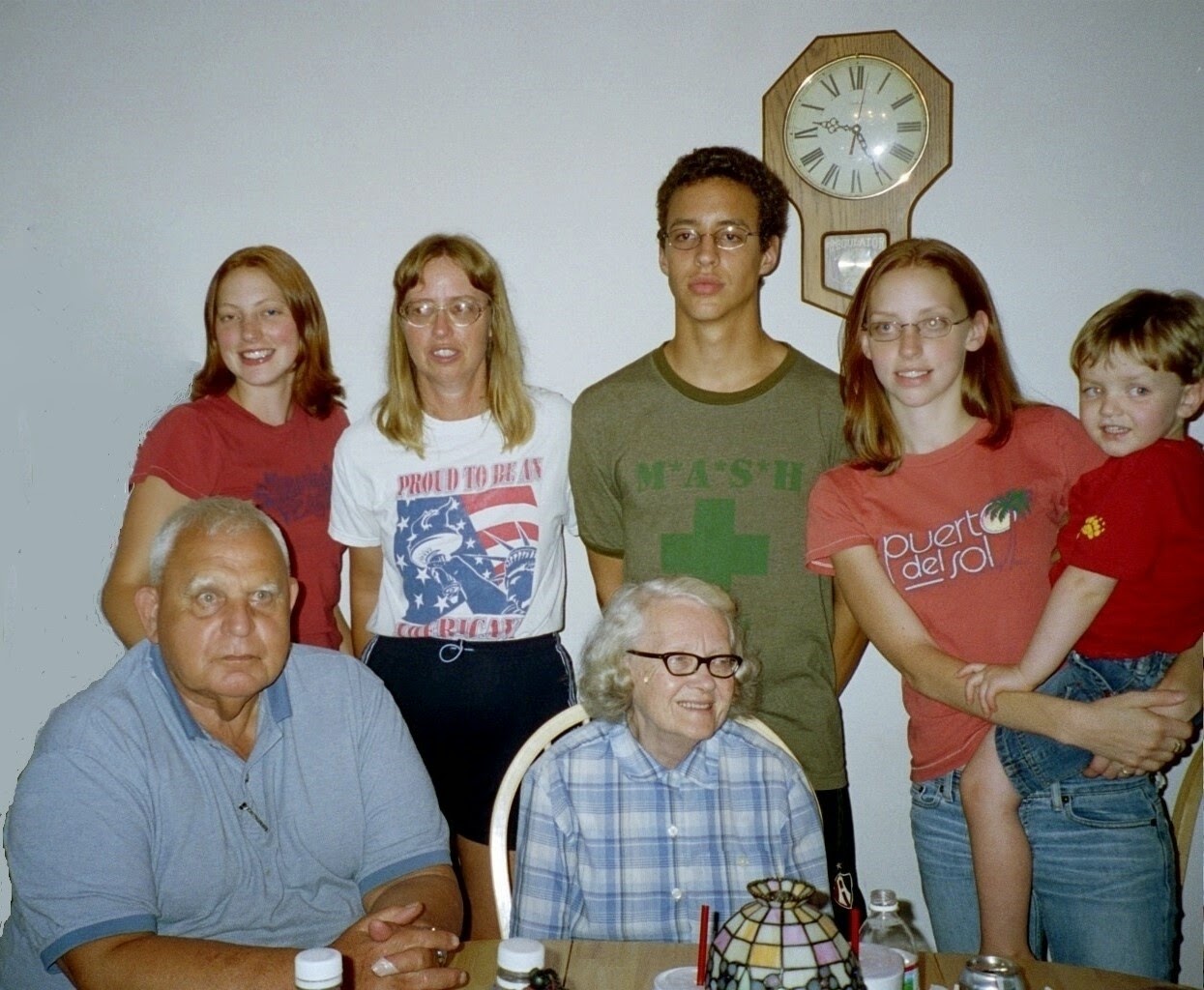 In 2004, all of us traveled home to celebrate Dad's 80th and Mom's 79th birthdays. Although Mom hated having her picture taken when we were kids, she relented a bit and even smiled for photos with the grandkids. 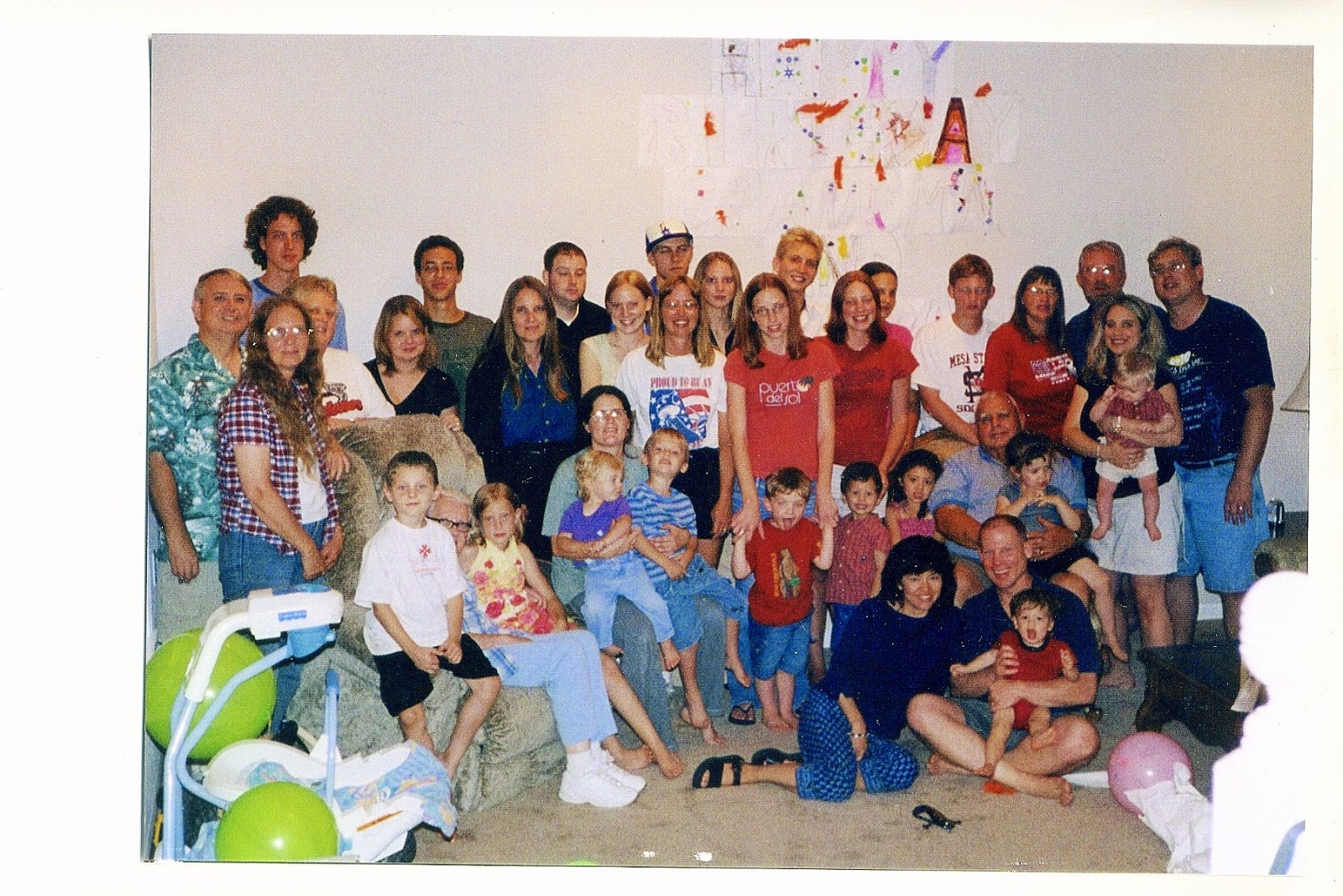 Lots of family photos were taken at the big birthday party, including one of Mom and Dad with all of their children and this one of all of the family members who were present. Mom and Dad had 23 grandkids at the time, who ranged in age from 28 years old to the youngest three, who were all 1 year old. Kyle, who was 3, was still my parents' only great-grandchild. 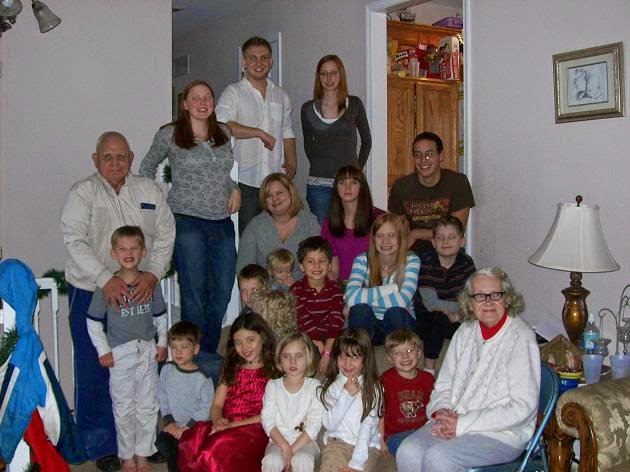 In 2007, I took multiple trips home to visit Mom and Dad, including one in December when my kids and grandson Kyle accompanied me. I always tried to take group photos with Mom and Dad. In this photo, Mom and Dad posed with all of their grandkids who were home and their two great-grandkids. 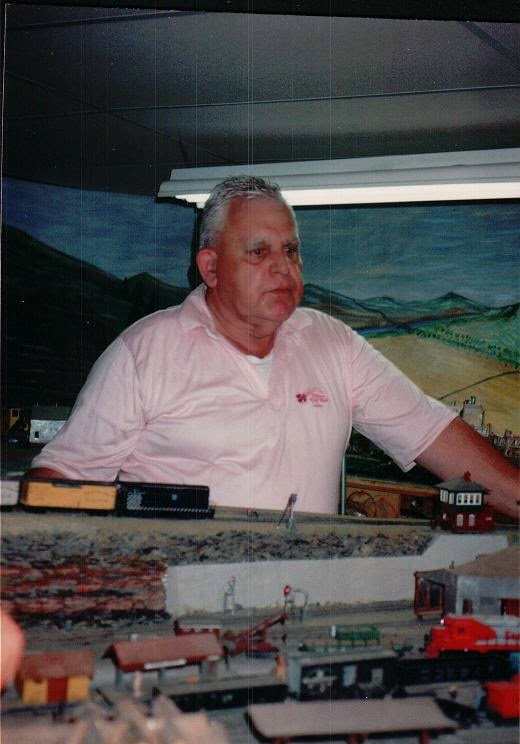 Dad lived a life filled with service to others. In addition to 28 years serving in the Army, Dad worked in the Kansas prison system for 10 years, serving in various capacities including warden of the Kansas State Prison in Lansing. In his spare time, Dad built a train setup in the basement, which many of the grandkids were fortunate to enjoy when they visited. 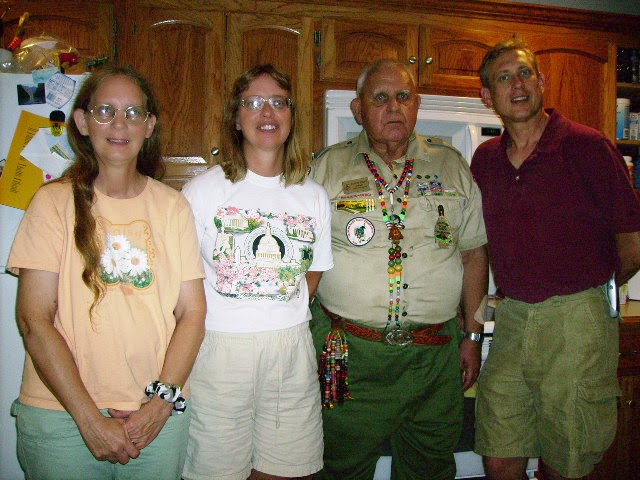 Dad was an active Boy Scout volunteer from 1968 until his death. It seems appropriate that the Dad I remember whistling his way through life had a Delaware Indian scout name "Nechasin Achpiquan Woapalanne," which means "Watchful Whistling Eagle." Dad received many awards for his service to the Boy Scouts, including the Kaw District Award of Merit, the Saint George medal, the Silver Beaver award and was honored in 2011 by the National Council of the Boy Scouts of America as a James E. West Fellow, the highest honor awarded to adult scout volunteers. 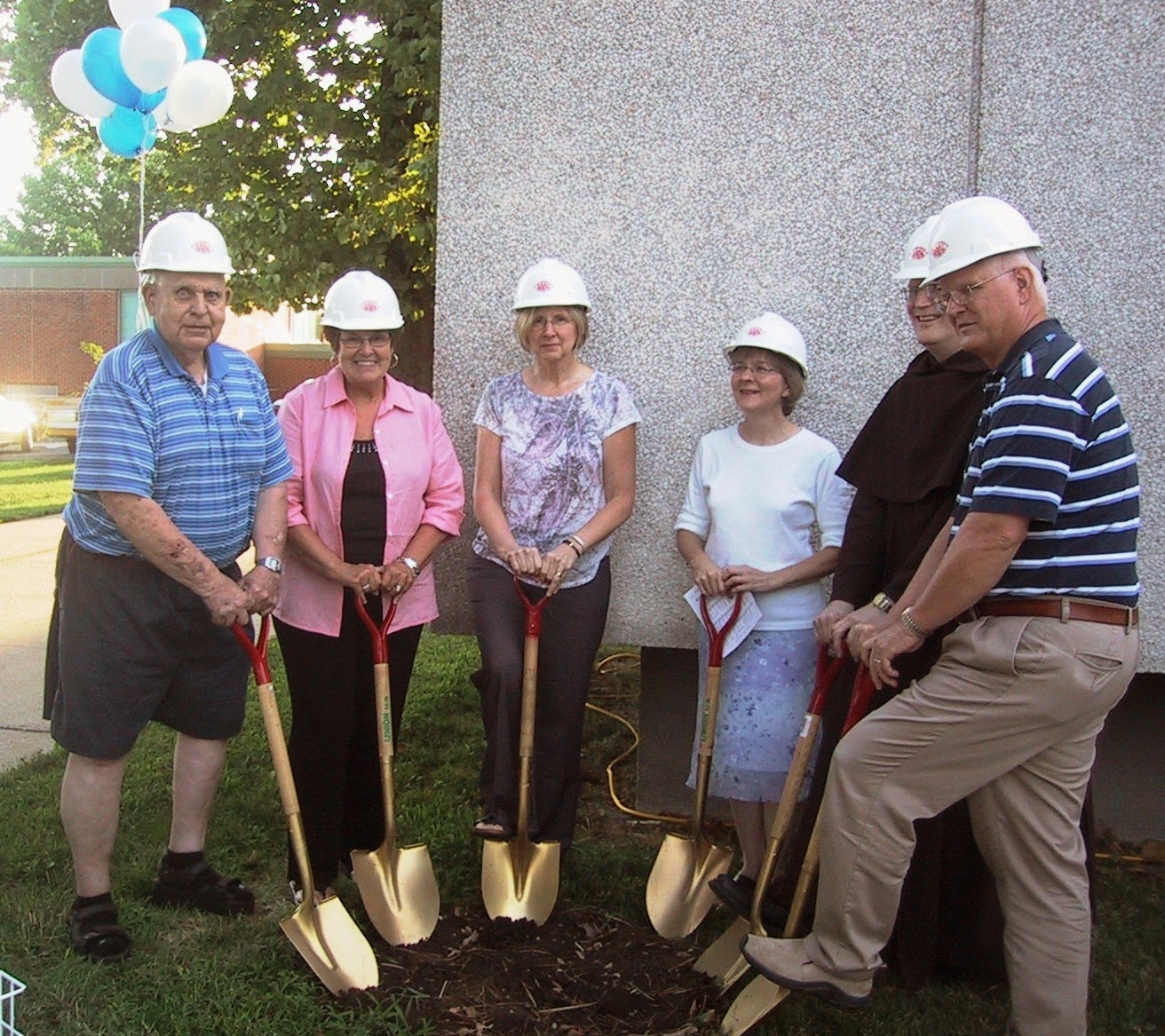 Dad was also very active in his church, serving many years at Immaculate Conception - St. Joseph Parish as a lector, Eucharistic minister and song-leader commentator.  Dad also served on the Pastoral Council, was secretary of the Finance Council, served on many church committees, was PTO president of the Catholic grade school many of us attended and later served as first PTO president of the consolidated Catholic schools in Leavenworth. 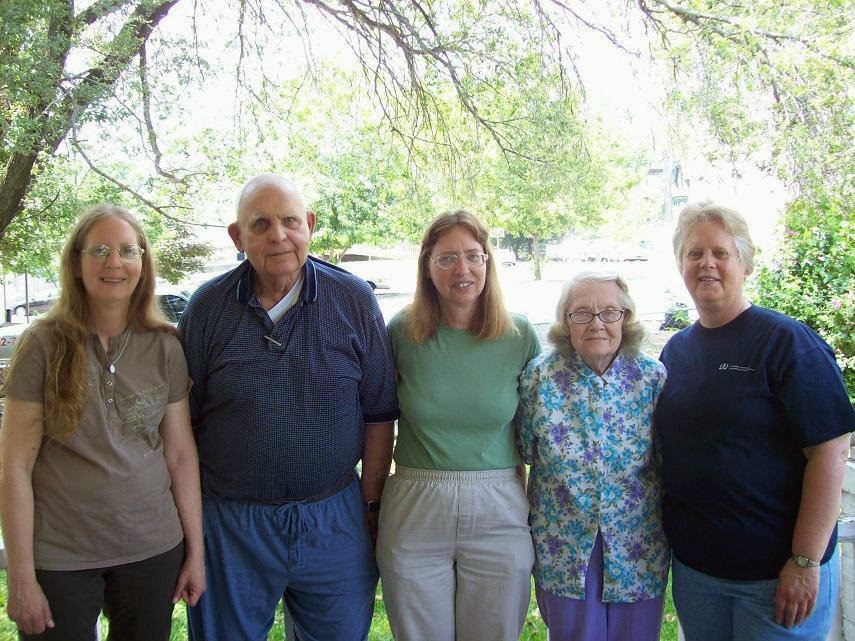 I'll always remember Dad first and foremost as a family man, the first man in my life and our family's hero. My brother-in-law Jim took this photo and several others of Mom and Dad with their three middle daughters on one of my visits home. 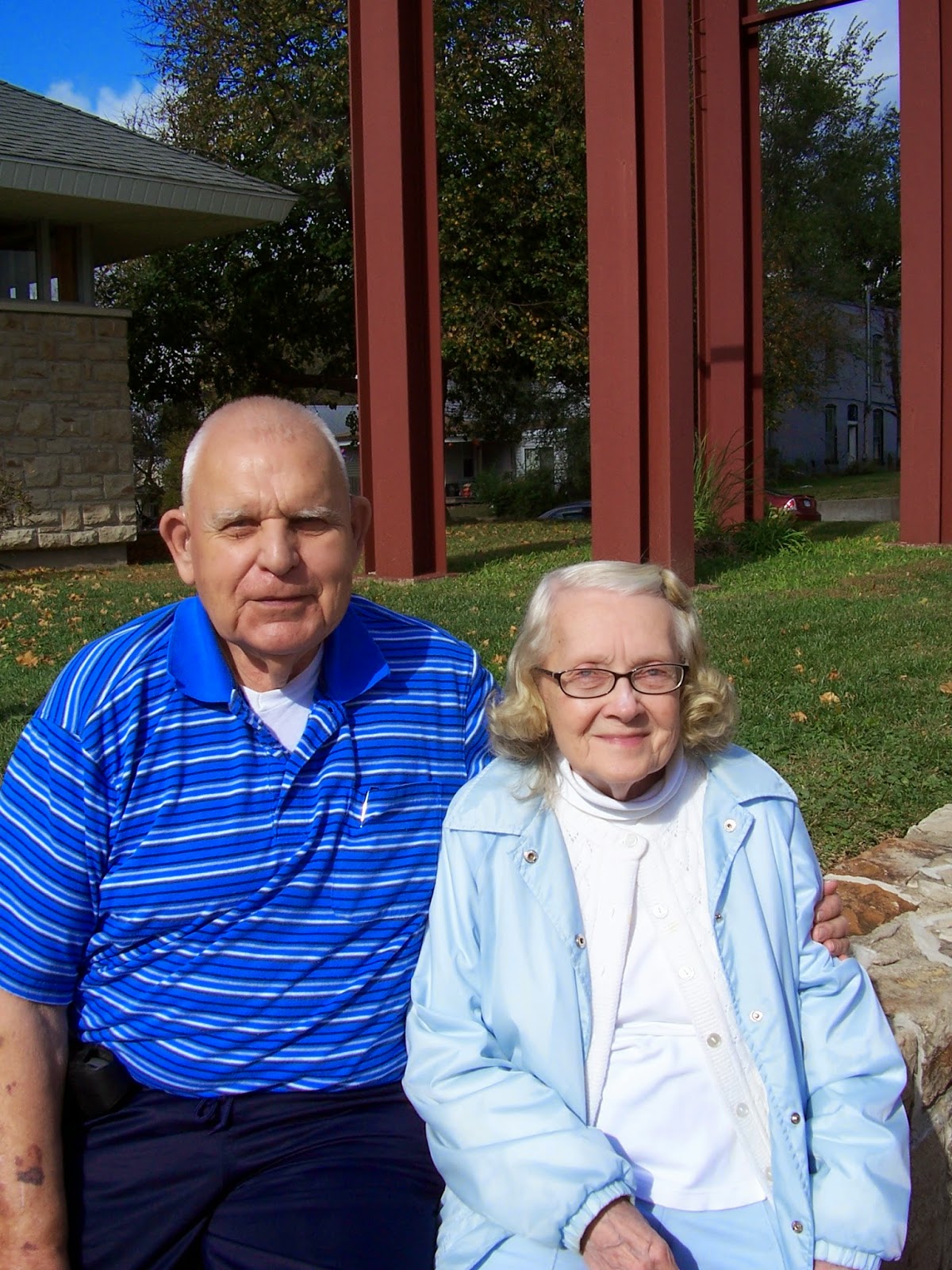 Dad battled cancer and won more than once, but in the end cancer took his life. Dad died on June 21, 2014, surrounded by family. Although we always thought Dad would die first, Mom preceded Dad in death by 16 days. Dad died just nine days after celebrating his 90th birthday by sharing cake and ice cream with his children, grandchildren and great-grandchildren. 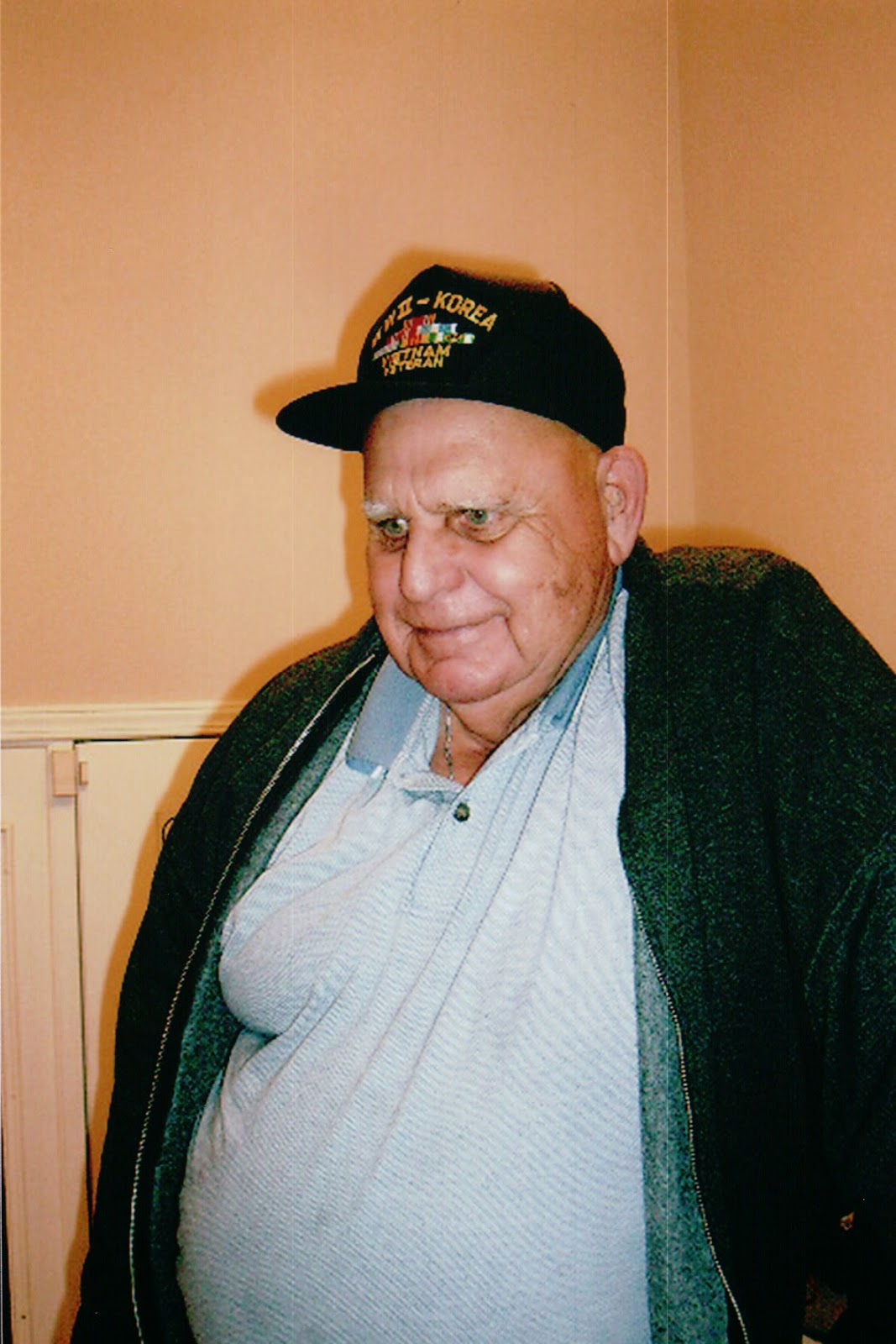 Dad was proud of his military service and wore with honor the three war veteran hat I bought him on one of my trips to DC. On the day he died, Dad was visited by two members of the Combat Veterans Motorcycle Association, who awarded Dad honorary membership in the organization. Members of the Patriot Guard Riders stood guard at the funeral home and church and escorted Dad to his final resting place, where he was buried with military honors, a hero to the end. 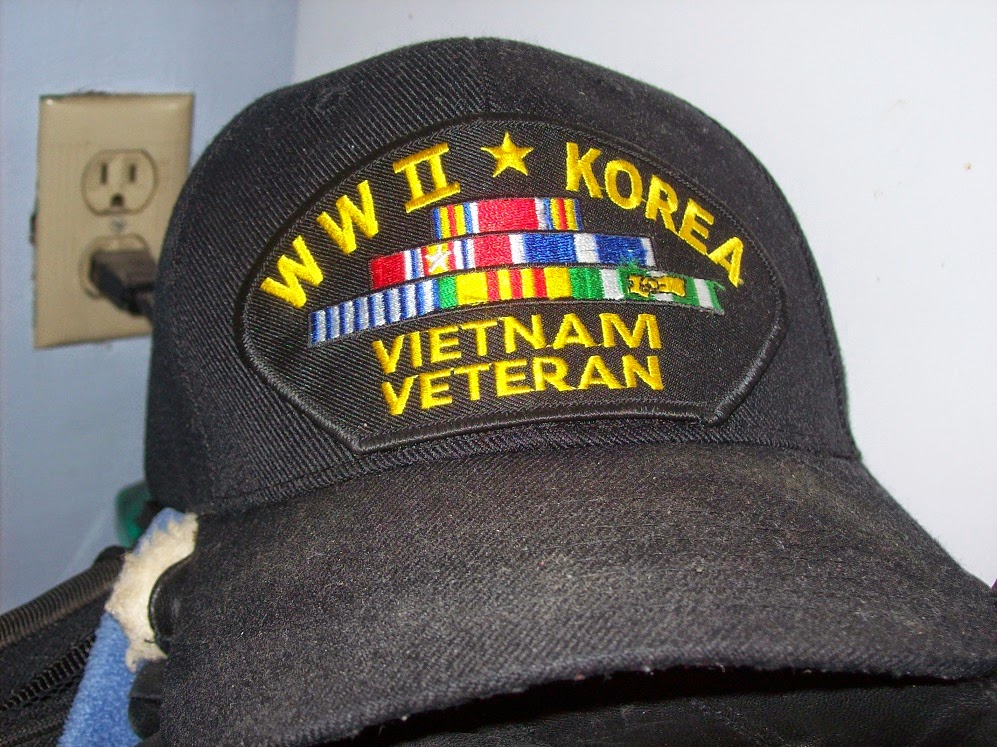 Each year on Veterans Day, America honors her heroes, the brave members of the U.S. Armed Forces who served in times of war and peace. This Veterans Day tribute is a gift to Dad, my first hero. Thank you the many gifts you gave to your family and thank you for your service to others and to the country you loved. We will love and miss you always!
Posted by Sandy Wallace at 8:26 AM